Not to be outrivaled: Bulldogs’ efforts hold up at The Reservation 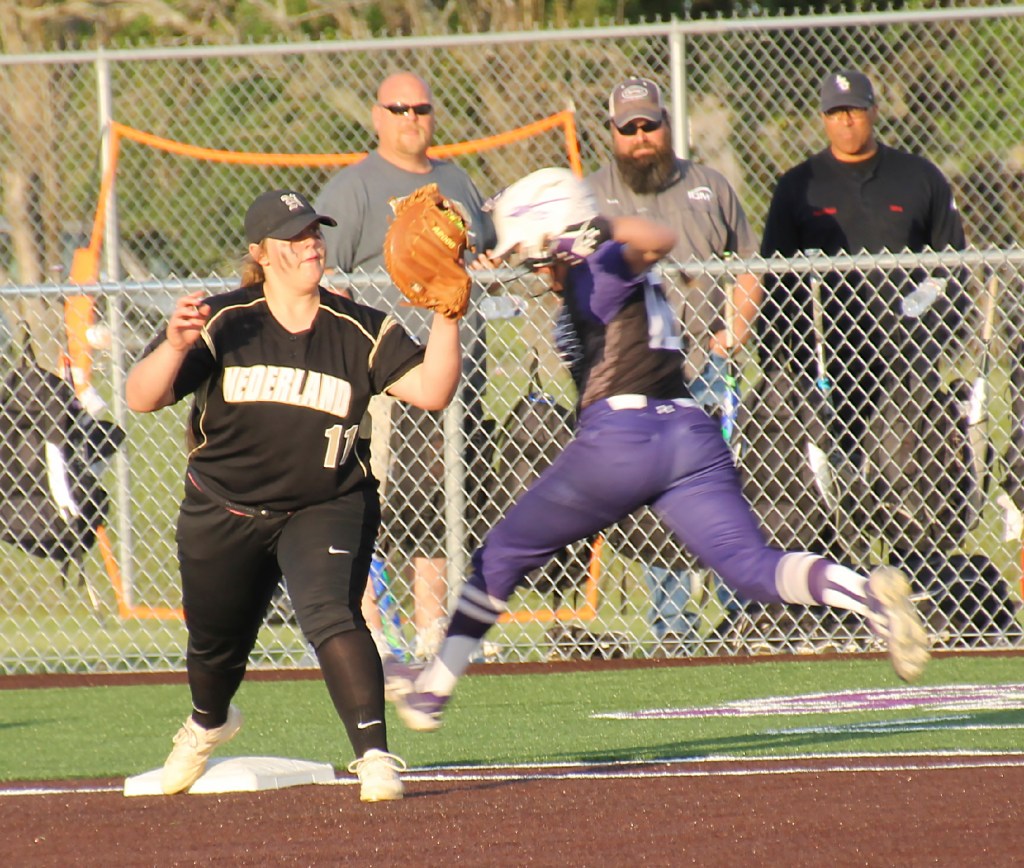 Bailey Beard of Nederland makes the catch at first base to put out Callie Jourdan of PNG on Tuesday in Port Neches. (I.C. Murrell/The News)

A three-run seventh inning was not enough for PNG, and Nederland remained unbeaten in District 22-5A softball with a 5-4 victory Tuesday.

And, wouldn’t you know it, all three are named Hannah.

Hannah Smith and Hannah Grumbles each drove in two runs. Smith hit a double to center field to score two, and Grumbles had a single in the third.

PNG’s Kaitlyn Boudreaux ended the shutout with a home run to lead off the sixth, but Nederland pushed the lead back up to four runs when Grumbles sacrificed to score Smith. The Indians (18-7, 8-2) made things interesting in the seventh when Alexis LaBure lined a single to score a run and, with two out, Kasidee Sartin drove in two runs on another single. But Destini Trahan got the next batter to strike out to seal the win.

Each team had eight hits, but four errors hurt the Indians.

PORT NECHES — Josh Hranicky threw a five-inning one-hitter and struck out 11 Tuesday in a rout of Memorial.

But that wasn’t all.

Jacob Vaughn launched an inside-the-park home run in the third inning that scored Nathan Vidrine, Holden Lane and Cameron Stansberry to make the score 8-0. He and Hranicky each drove in four runs.

NEDERLAND — Reilly Hebert and Landon Hiltz each drove in two runs, Brendan Dunkleberger and Hiltz each totaled two hits, and the Bulldogs (8-11-2, 4-3 in 22-5A).

Dane Jones, Chase Kemp, Burke Badon and Conor McGrath each had a hit for the Bulldogs.

Dunkleberger held Ozen to three hits and struck out 10 in the win.