After decades, PAPD uniform to get face lift 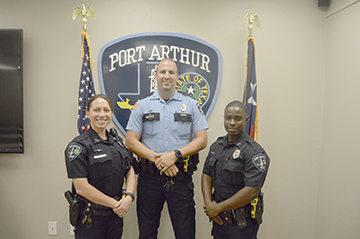 The baby blue is about to grow up.

In a few months, the Port Arthur Police Department will transition from their baby blue uniforms into new dark blue threads. The uniforms will also include two city of Port Arthur patches—one for each shoulder—and those patches will be outlined with silver thread rather than blue.

Risa Carpenter, the city of Port Arthur’s spokesperson, said this is more in line with industry standards.

“The industry standard for a lot of police departments is to have the insignia on both shoulders,” she said.

While there have been Internet rumors that the American flag decal will vanish, Carpenter said these rumors are not accurate. There will be an American flag on the uniform, but the committee has not decided where just yet.

The update is the first in decades. Lt. Jeremy Lloyd said he believes the baby blue uniforms debuted in the 1970s, and although the pants became dark blue sometime in the ‘80s, the uniforms haven’t changed much.

However, the update is more than cosmetic.

Last year, when the Port Arthur City Council voted to approve body cameras, the department needed to find uniforms that could accommodate those cameras. The cameras are about the size of a smart phone, and the new uniforms will include a small pouch near the chest areas inside of which an officer can secure the camera.

Also, as officer Adam Cousins pointed out, the current uniforms are so out-of-date, getting new ones was getting difficult.

“They didn’t make the uniform we have now,” he said of various suppliers.

So, with little choice, the department commenced the search for a new look.

Cousins, along with Lloyd, officers Sadie Guedry and Jonathan Green were all on the seven-person committee to pick that new look. Guedry said that while the re-design was inevitable, there were some older officers who resisted giving up their old colors.

“Some of these guys have been doing it for 30 something years,” she said. “I’m sure there’s going to be some attachment.”

However, she said other officers were happy to get an updated look.

Also, the old uniforms won’t go away forever. The department will use a baby blue uniform with long sleeves and a tie for special occasions such as funerals or parades.

“It’s a good way to keep our tradition,” said Cousins.

Cousins pointed out the new uniforms may help boost performance a bit, too.

Cousins explained that the committee has been spending months over things like color and manufacturer. He explained each company had six or seven colors to pick from, so there were quite a few choices.

The department’s dark blue uniforms are a wool/poly blend, though none of the officers seemed to think a dark blue partly wool uniform would be too hot in Southeast Texas.

“With all the stuff on, it’s hot as it is,” Cousins said.

“We’ve gotten used to it,” Guedry said. “In the summertime we’re hot. Period.”

“And it’s rare were in the sun for hours and hours,” Green said.

Lloyd said he didn’t know the exact cost of the uniforms offhand because the city set aside money to buy them, the body cameras and data storage for a five-year period all at once.

While some officers are trying out the uniforms now, the department will not make the switch for several months.