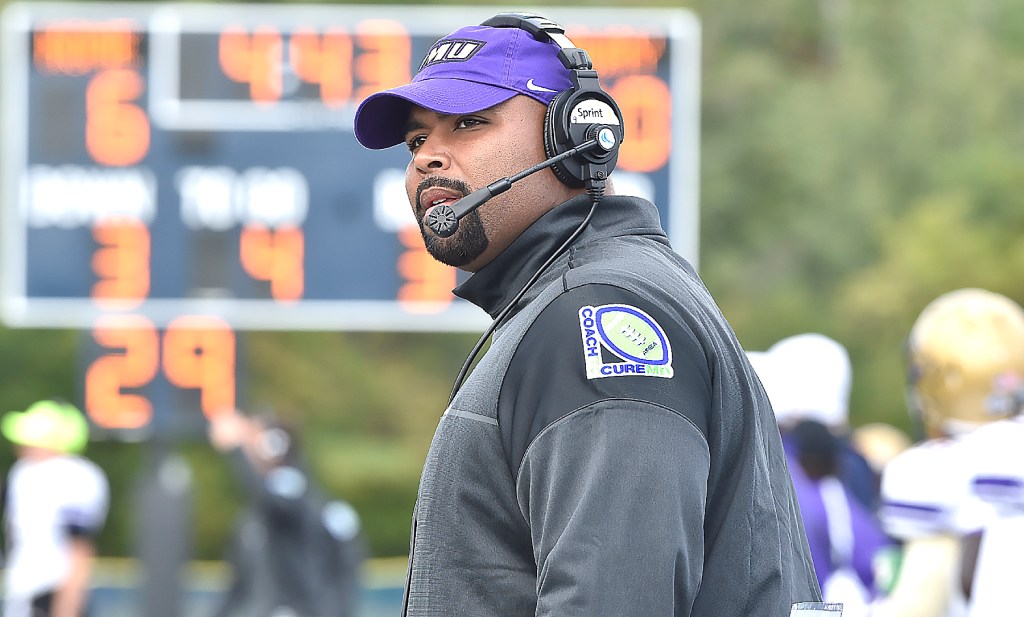 Jamal Powell was an assistant on James Madison’s 2016 NCAA Division I championship team. (Cathy Kushner/Special to The News)

Powell replaces Brad Bedell, who left for a similar position at Boise State earlier this month.

“I have a history with Jamal,” said Schultz. “I recruited him and coached him for five years at TCU. He also has a long history with the other coaches in the offensive room. Needless to say, Jamal, Eric Buchanan and Kevin Brown all played on the same team. He is a great fit for this program.”

Powell spent the past two seasons at James Madison where he helped guide the Dukes’ offensive front to one of its best seasons in program history. JMU set several conference records on its way to winning the 2016 FCS national championship. JMU’s offense set records for scoring, rushing offense, total offense and first downs in a season that saw it achieve the pinnacle of college athletics. Powell’s line protected an offense that led the nation completion percentage, team pass efficiency and first downs. The Dukes also led the nation in winning percentage during their run to the 2016 national title.

“The thing about Jamal is he just left a national championship program on our level,” said Schultz. “James Madison won the title this past season and he coached their offensive line, and did a phenomenal job. It was a real easy transition for us.”

Powell went to JMU after a stop at West Virginia State, where he served as the run game coordinator and offensive line coach. He also served as the program’s strength and conditioning coordinator. Before WVSU, Powell held the same title at Seton Hill University.

He also made coaching stops at Texas A&M as a graduate assistant, Centre College and Southwest Baptist University. During his time with the Aggies, Powell coached three All-Big-12 linemen, two of which were selected in the NFL Draft.