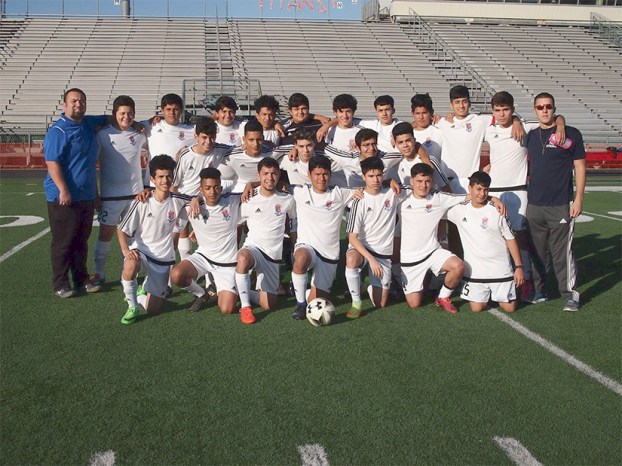 Courtesy photo Despite the small program, the Eagles’ boys’ and girls’ teams have had a tremendous debut year in the UIL, going up against bigger, better-funded teams. This might have been a surprise to outsiders, perhaps, but it was not to players and coaches.

It’s been a big year for Eagle soccer.
The Bob Hope School has offered soccer for years. And they’ve had some good teams, teams that have won the state championship in the Texas Charter League. But, as the name would suggests, that league is for charter schools and, while Bob Hope is a charter school, they wanted to go head to head against the big guys—the public schools.
So, this year they entered the UIL, the University Interscholastic League. And they went in in a big way.
“We actually scheduled to play the No. 1 team in the United States and the state champions in Texas this year, and we lost both, 7 to 0 each game, but it said= something,” Athletic Director Rick Frey said. “We wanted the toughest challenges.”
It said the Eagles would not give up or give in and, many games later, the Eagles boys’ team is gearing up to play their first bi-district game next week when they’ll face off against Waco La Vega in Brenham. The girls’ team fell Thursday in area play, 3-0 to Lufkin Hudson, but both teams are doing better than could have been expected. The boys won, beating Jasper 3-0.
“Talent-wise, we’re competing with teams way bigger than this and holding our own,” said Frey. “For us to even get in the playoffs is huge. We’re the smallest team in the state. … We have the lowest enrollment of any school in the state of Texas playing soccer.”
What the team does have is talent, and a raw work ethic that pushes the athletes.
“Honestly I gotta give all the credit to these guys. They showed up in the preseason and they put in the work,” said Coach John Morgan. “One big thing is, we conditioned. There was a grueling amount of conditioning before these guys could even touch a ball because we knew we’d be going up against some big teams.”
This is Morgan’s first year at Bob Hope. Frey, too, has only been at the school a couple of years. Morgan had been at Houston Independent School District and when he made the move, when he came to Bob Hope had to accept a few … challenges.
At Bob Hope though, there’s no modern, air-conditioned weight room featuring any high tech equipment. In fact, there’s no weight room at all.
“We did body weight training,” explained Morgan. “W did 1,000 push ups a day some days.”
Couple that with sprinting, squats and abdominal work and, any way you look at it, it’s a lot of sweat.
“It has paid off,” Enry Reyes.
Reyes is a midfielder and occasional striker. He nailed two goals in Thursday’s game against Jasper and he said Morgan’s coaching style was a welcome relief.
“I’ve been playing since sixth grade and every year I’ve been on the soccer team. The previous years we actually went far, but we didn’t have the training we needed until these guys came,” Reyes said, of the AD and the coach. “The school before they focused on sports but we needed people to focus on soccer because we knew that soccer was one of the strongest sports here. … They’ve been helping us since we got here and I thank them for that because they focus on things we actually need.”
Jonathan Gutierrez, the goal keeper for the team, said it’s been an intense year. In addition to the tough trainings, he said the team as a whole wants to show up at games and perform just as good as their public school counterparts.
“It’s been a lot harder and there’s more pressure to do better because it’s our first year and we want to show folks that we are a team and we can do it even though we have less,” he said.
For his part, Morgan said he’s thankful the team’s accepted the challenges he’s laid before them.
“I think they had trust in each other and they had trust in me,” he said. And, he added, the team is scrappy. Whether on defense of offense, his guys don’t relent.
“We’re aggressive everywhere,” Morgan said. “I tell them, ‘I want sharks.’ We’re Eagles but when that ball is on the ground, we’re going after it.”
Frey added that, in case anyone would be forgiven for thinking the AD and the coach were partisans, colleges are scouting players on the boys ‘and girls’ teams.
“We have six seniors on our boys’ team and all six are receiving interest to play ball at the college level,” Frey said. “And for the girls’ team, we have girls at the senior, junior and sophomore level who have received looks from the university level so we’re hoping by the end of the year we’ll have quite a few players signed.”
But before that, of course, are the playoff games.
Don’t miss the La Vega game, scheduled for Thursday at Cub Stadium in Brenham. Kickoff is set for 8 p.m.

BEAUMONT — Vincent-Beck Stadium at Lamar University is only a reminder of how much Adaptive Sports for Kids has grown.... read more