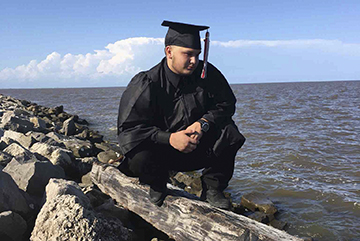 A photo taken from a GoFundMe account for Justin Guillory. The 19-year-old was killed when he fell from a moving vehicle at McFaddin Beach on Saturday.

The family of a 19-year-old Port Arthur man who was killed at McFaddin Beach has set up a GoFundMe account to help with funeral expenses.

Justin Joseph Guillory died at St. Mary Hospital on Saturday after falling from a moving vehicle, according to information from the Texas Department of Public safety.

DPS got the call of the incident at about 5 p.m. March 18 where they learned the victim was standing on the running board of a H3 Hummer. He fell from the vehicle as it was driven down the beach and was brought by private vehicle to the hospital where he later died.

The driver of the Hummer, an 18-year-old man from Port Arthur and three other passengers were not injured.

The incident remains under investigation and no charges were filed as of Saturday night.

The GoFundMe account is “Moving Mountains For Justin Guillory” https://www.gofundme.com/3j2eps8