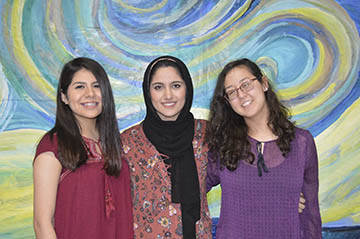 Port Neches-Groves High School seniors Nicole Salas, left, Umera Ahmed and Cynthia Cavazos, have entered the Law Day Art Contest where winners will win a cash prize and their artwork will be displayed in the Beaumont courthouse for a year. All three seniors placed i the contest last year. Mary Meaux/The News

PORT NECHES — Nicole Salas, Umera Ahmed and Cynthia Cavazos have put chalk to canvas and created works of art in tribute of American Frontiers: Past, Present and Future” in the Law Day Art contest.

The students, seniors at Port Neches-Groves High School, earned spots in the contest last year but will have to wait until a later date to know if they placed this year, art teacher Seida Bryan said.

“I think they all have natural talent, I just helped on techniques,” Bryan said. “They have the talent and the work ethic and part of art is practicing, maybe make mistakes, and learning. I give them the tools and they run with it.”

All three students have been interested in art for most of their lives and feel art is an extension of their expression.

This year Cynthia Cavazos submitted “Reflection,” a pastel rendering of a child with flowers looking at a veteran’s wall where she sees a soldier saluting and a patriot on horseback with the American flag.

“My brother in law is in the Army and I thought it would be a nice thing to do,” Cavazos said. “To me, a lot of soldiers get overlooked.”

“I like art. Art kind of frees you the way reality can’t while you’re stuck doing the same thing every day,” she said. “It’s nice to have something different every once in a while.”

Cavazos is in the Key Club and Prime Time at PN-G and plans to attend Lamar University upon graduation.

Last year she placed third in the contest.

Salas also included a quote from then-senator, Barack Obama, “We are one people and our time for change has come,” a map of the U.S., the flag and the seal.

“I feel like art is a form of expression and I like to let people see what’s in my mind,” Salas said. “Everybody has a different definition of art and how others perceive art.”

Salas plans to attend Lamar University and later go into the medical field as a pediatrician.

Umera Ahmed’s entry in the competition is called “Never Past.”

The pastel work features a black man where one side shows a shirtless man with cuts to his face, blood on his lip and some reddish scars on his chest while the other side features the same man in a suit.

“I think in our country, our world, blacks are discriminated against,” Ahmed said. “It’s never really past, the injustices.”

Ahmed said art is one thing she feels confident in and, as her art is noticed and complimented on, she is spurred on to do more.

She plans to attend Lamar University and major in psychology with a minor in art.

In 1958, President Dwight D. Eisenhower designated May 1 as Law day, which is meant to celebrate and strengthen the American heritage of liberty, justice and equality under the law. The contest is intended to help students and the public understand how the law protects our American freedoms.