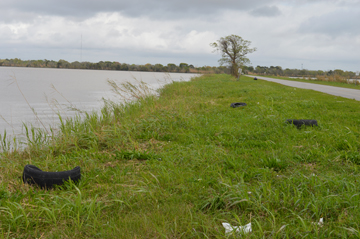 Tire dumping is an issue that's not only an eyesore, but a public health issue as well. For example, tires scattered along the roadside on 25th Street.

Port Arthur has an issue that’s not only an eyesore, but a public health issue as well. Fortunately for residents there’s a solution if procedures are followed.

The dumping of tires occurs throughout the city. Jennifer Edwards, environmental operations manager with the city, said sometimes there are opportunities to pick up lots of tires by her crews in the solid waste department. Other times they’re not, but it’s still an ongoing problem.

Edwards is urging residents to call their department to pick up tires if they see them in their neighborhood or along the streets.

“When you see them, we ask you give us a call,” she said. “On the last Saturday of the month we exclusively pick up tires. The landfill cannot accept tires because we don’t want to mix (the trash).”

“We bring the tires to the operations facility (on Highway 73) and they’re offloaded in their own section. They’re then transferred by trailer to a recycling center we have a contract with.”

Minimum risk inmates from a correctional facility help fill the trailer at the operations center and they’re also fed lunch.

Edwards said it’s rare for residents to bring tires to the operations center because there is no way to offload them. She said they prefer to pick up the tires.

“We welcome phone calls to let us know,” she said. “Tires can be stacked up and placed curbside, preferably not in the ditch or have it block the storm drain and not on private property. We can’t retrieve them off of private property.”

Edwards said tires on private property can be moved curbside for pickup.

Whoever is doing the tire dumping remains a mystery, however.

“We don’t know who’s doing the dumping. It’s very difficult to say,” Edwards said. “We’re working with the police department to identify some hot spots. It’s not just tires, but other trash is being dumped illegally. We’re asking them to be on the lookout while on patrol.”

She added that there’s a possibility some tire shops may be dumping, but it’s hard to confirm without any concrete proof.

“No citizens will have 100 tires to dump,” she said. “It points that way (to the tire shops). We really want to monitor the hot spots. Pleasure Island and Port Acres are troublesome spots.”

“There’s a possibility of placing cameras out there to identify individuals dumping tires and trash illegally.”

Edwards said the dumping is happening not just in rural areas, but in the city as well, particularly on dead end streets, streets with poor lighting or with too much overgrowth. Another problem area are alleyways and around apartment complexes.

Water can accumulate inside of the tires too, creating a mosquito breeding ground that can be a health hazard.

They also take a long time to decompose.

Furthermore, tires identified around the city can be picked up at the 2017 Port Arthur Trash Bash on Saturday, April 8. Solid waste crews will also be out on Saturday, March 25 to pick up tires.

“We really appreciate citizens calling us to let us know where the tires are. It’s a great help,” Edwards said. “We want to keep our city beautiful.”