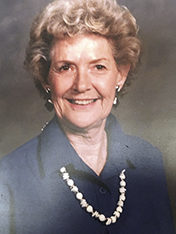 Evelyn Inez Hansen went home to be with the Lord and her late husband, Henry Arnold, and middle son, Glenn Edward, on March 8, 2017.  Evelyn was born on September 14, 1925 in Kentwood, Louisiana. Her family moved to Houston when she was a teenager and she graduated from Milby High School with honors and was Queen of her class her senior year. She attended Houston Business College and went to work for San Jacinto Ordnance Depot (SJOD), where after World War II, she met her husband, Henry Hansen, Texas A&M Class of ’42 Mechanical Engineer and an Army Captain. They moved to Port Arthur, Texas where Henry began a long career at Texaco, eventually being Chief of Maintenance for Texaco’s largest refinery. They raised 3 sons in Port Arthur and Evelyn was active in several organizations- Cub Scouts, Boy Scout Troop 82, Little League Baseball, and The A&M Mother’s Club. All 3 boys were Eagle Scouts and graduated from Texas A&M University. Her love of giving back to her community continued to evolve as she was President of the Port Arthur Federated Woman’s Club and Port Arthur Trivium Club, Chairman of the Rose Hill Board of Directors, Treasurer and Social Chairman of Beta Sigma Phi , Member of The Griffing Park Garden Club, Tyrrell Elementary School PTA, Edison Junior High PTA, Thomas Jefferson Senior High School and Docent of the McFaddin Ward House in Beaumont. She was also a member of The Historical Society, Community Concert, Knife and Fork Club and The Parliamentarians.

In The Service League she was Placement Chairman, worked at The Country Store, Charity Ball, Music Festival, The Sunnyside Speech and Hearing Center, Well Baby Clinic at St. Mary’s Hospital, The Art Show, and many others. She was a lifetime member of St. John’s American Lutheran Church and taught Sunday School and Vacation Bible School. She was President of The Women’s Organization. She and her husband reared and educated 3 sons, all professional men. They taught them strong principles of family, church, and school to prepare them for the trials and tribulations of life. In 1989 her sons dedicated a fountain, The Hansen Fountain, in front of The Clayton Williams Alumni Center at The Association of Former Students at Texas A&M University in memory of their father, Henry, and in honor of their mother, Evelyn.

She was a loving, caring mother who instilled in her 3 sons the pursuit of excellence in all their endeavors whether it be church, family, career, or philanthropy. She was also a major supporter of The Food Bank. The family would like to thank Dr. Oscar Enriquez as he took care of her as his own mother for several years. Also she adored the visiting nurses who took such personalized care of her, especially Cori Norwood.

Funeral Services will be at Clayton Thompson Funeral Home on Sunday, March 12, 2017 at 2 PM; with Rev. Clay Faulk officiating, with a gathering family and friends from 1 PM until service time. Burial will follow at Greenlawn Memorial Park.

Death notices and services for March 11