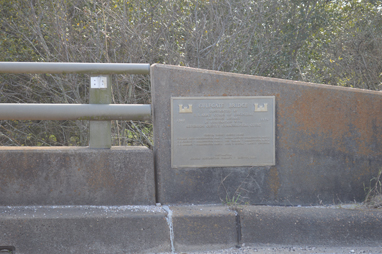 Sam Monroe, president of the Port Arthur Historical Society, said the building of the Gulfgate Bridge, now known as the Martin Luther King Jr. Bridge, was a longtime coming.

Monroe said the fixed span bridge was a great improvement connecting Port Arthur to Pleasure Island over the Pleasure Pier Bridge that was a drawbridge, prone to break down.

“You could be stuck on the island or you would have to go all the way to Lake Charles to turn around,” he said. “The MLK Bridge was another link in the Hug the Coast Highway.”

“Highway 87 ran along the beach, you could cross over the bridge and take the Causeway to Louisiana. It was an unusual environmental and natural experience and a tourist attraction.”

The only knock against the bridge, Monroe said, was it was not associated closely with downtown.

The old drawbridge was across from the Jefferson County Sub-Courthouse. If a new bridge was to be built downtown, it would have to be backed up so far and many buildings destroyed in the process.

“It would have to be built all the way by Rose Hill Manor,” he said. “They need an elevation for height to build the bridge tall enough for ship traffic to pass.”

“I think this bridge fostered development of the island.”

Construction started in 1967 by the U.S. Army Corps of Engineers and opened in 1970. U.S. Rep. Jack Brooks who funded the project was the dedication speaker at the grand opening.

By Drew Cloud, The Student Loan Report Student loans were not a major component of Trump’s campaign rhetoric. Trump made... read more