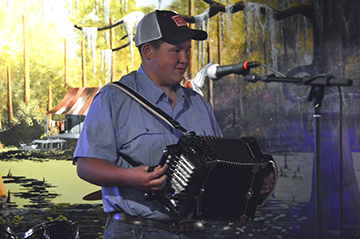 FILE PHOTO — Donovon Bourque of Beaumont competes in the Texas Folklife Big Squeeze Accordion Showcase at Larry’s French Market and Cajun Restaurant in March 2017. Bourque went on to win the competition in his category.

GROVES — The Crowley Two Step and the Creole Stomp were on the play list for two young performers during the Texas Folklife Big Squeeze Accordion Showcase on Saturday.

Roberts, 21, of Beaumont, and Bourque, 15, of Beaumont, performed for the crowd at Larry’s French Market and Cajun Restaurant as officials with Texas Folklife recorded. 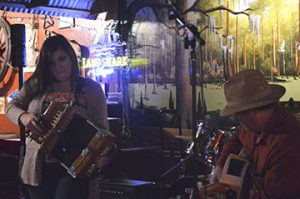 “I watched her (Roberts) at the Rodair Club when she was a young age,” Roy said.

Roy also introduced Roy, quoting him as saying “I’m gonna be here and play Cajun music until I take my last breath.” 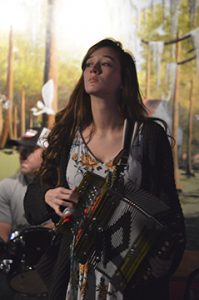 Elizabeth Kelley performs with her family’s band, The Dallas Street Ramblers. Kelley is the 2015 winner in the Cajun/Zydeco category.
Mary Meaux/The News

Elizabeth Kelley, a Port Neches resident and the 2015 champion in Texas Folklife’s Big Squeeze contest in the Cajun/Zydeco category, took the stage with her family’s band, the Dallas Street Ramblers, after the competition.

Up to nine finalists, three from each genre which include Cajun/Zydeco, polka and Tex-Mex, will be selected the week of April 3 by a panel of judges and will perform at the Big Squeeze Concert and Finals at the Bullock Museum on Saturday, April 22. At that time the grand prize winners will be selected.

The three winners will receive a prize package valued at more than $4,000, including a cash prize, a brand new Hohner accordion, performance opportunities with Texas Folklife, publicity, professional development and other professional opportunities.