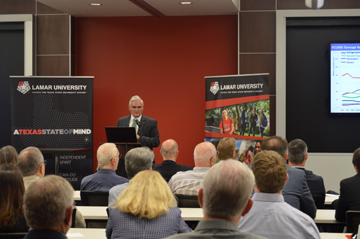 Jorge Quijano spoke Friday at the Center of Innovation, Commercialization and Entrepreneurship at Lamar University-Beaumont. The theme of his presentation was the "Development and Operation of the Newly Expanded Panama Canal and Vision for its Future."

Quijano spoke Friday at the Center of Innovation, Commercialization and Entrepreneurship at Lamar University-Beaumont. The theme of his presentation was the “Development and Operation of the Newly Expanded Panama Canal and Vision for its Future.”

The public ports of Beaumont, Port Arthur and Orange, as well as the many petrochemical terminals on the waterway have already taken advantage of the increase Panama Canal capacity,” according to a press release from Lamar University. “The first LNG vessel to pas through the new Panama Canal locks debarked from the Sabine Pass LNG Terminal.”

He said the construction program became possible after a national referendum was proposed in Panama in 2005. He added that the passage of the proposal was made possible after representatives went out and spoke to the people all over the nation for six months.

In 2007, 77 percent of the residents gave them the go ahead to proceed because they spoke with them personally.

“It took a lot of planning and execution with the people,” he said.

Giving a PowerPoint presentation, Quijano said most of the tonnage passing through the canal goes to the United States, followed by China, Chile, Peru, Japan and South Korea.

The port will now accommodate much larger vessels that can now be loaded at the highest degree.

Quijano said the population in Latin America will grow to a population of 700 million by 2030 and have a larger middle class with more buying power. He added that some South American nations rely heavily on seaborne trade.

The project consisted of dredging from the Atlantic Ocean to the Pacific Ocean to a manmade lake where two new locks were built. Part of the dredging involved going through two hills. A new channel was built as well.

The width of the channel is now 715-feet versus the original 300-feet.

Ports on the east coast of the United States are upgrading their infrastructure since the canal is completed and container service has moved westward in the United States, covering almost all of Texas.

He added that the Port of Houston now has unparalleled market reach with their rail and trucking.

In addition to an increase of shipments of liquefied natural gas and liquefied petroleum gas, Southeast Texas will continue to ship military cargo, petroleum and grain. LPG routes can now run to Asia, South America, Mexico and the West Indies.

“Under the leadership of Senor Quijano, the completion of the $5.25 billion, Panama Canal expansion project, inaugurate on June 26, 2016, marks the beginning of a new era in ocean transportation,” said Erik Stromberg, executive director for the Center for Advances in Port Management. “Faster transit times and lower costs are providing tremendous benefits in moving cargo between Texas ports and Asia as well as the west coast of South America.”