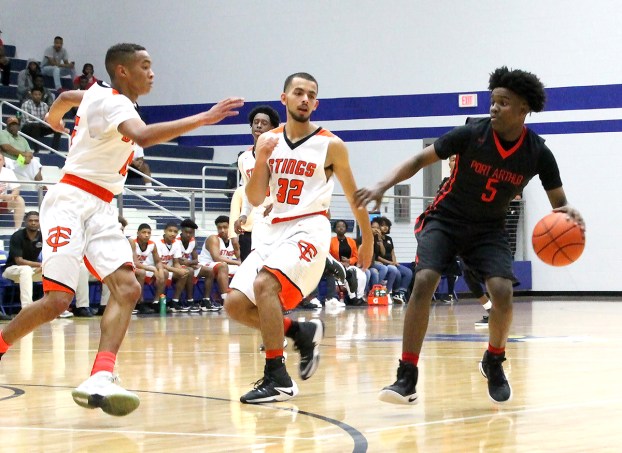 Jyson Butler of Memorial, handling the ball, finished with 12 points in a 68-64 double-overtime victory over Texas City on Friday in Channelview. (I.C. Murrell/The News)

MURRELL COLUMN: Could Titans-Stingarees get any crazier?

CHANNELVIEW — For as calm as Jyson Butler was when he tied a very intense playoff game up late in the first overtime, the Port Arthur Memorial junior only needed to soak up the relief of beating Texas City in double overtime.

So was Texas City.

The Stingarees had Memorial down by as much as 24-16 and 43-36 at the end of the third quarter. Still, Butler and the rest of the Titans had 8 minutes to warm up and extend their season.

It’s been extended by 40 minutes — 8 in the two overtime periods and 32 more coming Tuesday night, when they play 10th-ranked Fort Bend Marshall (29-7) in the 5A Region III quarterfinals at North Shore High School in Houston. (Saturday’s game story incorrectly listed the upcoming round as the regional semifinals.) Tipoff time is set for 7:30 p.m.

Butler’s calm shot from the left wing sent the Titan faithful inside the Bill Neal Center at Channelview High into a frenzy and relaxed any internal nerves wracking in an 8.2-second span.

The Stingarees ran their under-basket inbound play to perfection nearly every chance they had. It was no different when Jeremiah Hernandez laid the ball in with 10 seconds to go.

But the ball was brought down the court, and the Stingarees trapped Thailan Wesley — who was just getting warmed up himself — well outside the arc to leave Butler open on the left wing. Butler had eight of his 12 points in the two overtimes, including a layup with 31 seconds left in the first extra period that narrowed the deficit to 59-58.

“I had a lot of confidence,” Butler said. “I had a lot. The team trusts me to shoot the ball, and they gave it to me.”

The suspense in the clutch was totally different from that at the 5:51 mark of the third quarter when senior Bishop James lay chest-down on the floor following a rebound attempt, his sprained left ankle slightly elevated. It was the second time in the game that James — who injured the ankle in practice Thursday and also was dealing with a fractured shin — tweaked the injury. Memorial trailed 33-26 when James had to be carried off the court.

About 3 minutes later, James was back on the court.

Something about playoff basketball in Texas brings the warrior out of someone. Maybe it was just senior leadership.

While he was gone, Wesley made his first three-point basket of the game after going cold from the arc. Coleman never forced his leading scorer to the pull the ball back out and set up a play.

He was really talking about Butler’s trey.

I.C. Murrell can be reached at 721-2435 or at ic.murrell@panews.com. On Twitter: @ICMurrellPANews