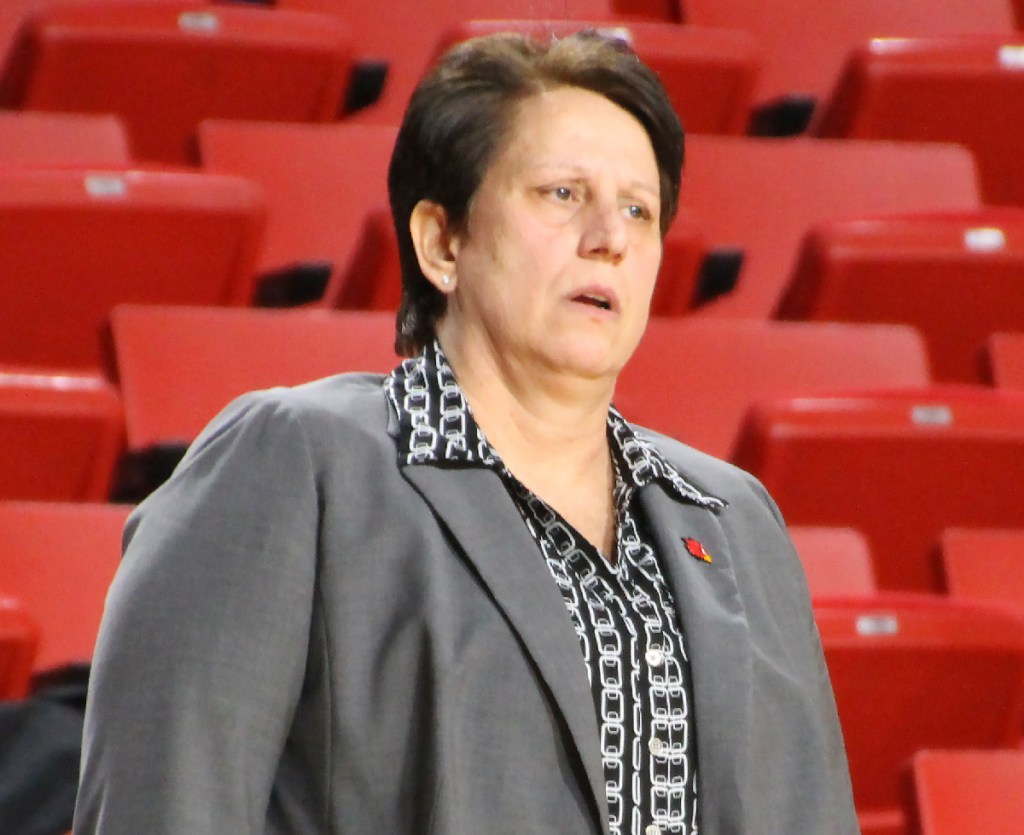 Lamar’s Robin Harmony either will win her 200th game as a head coach or suffer her 100th defeat today. (I.C. Murrell/The News)

BEAUMONT — The Lamar Cardinals look to reach the 20-win plateau for the first time in four seasons when they host the Houston Baptist Huskies in a Southland Conference women’s basketball game at 2 p.m. Saturday in the Montagne Center.

The Cardinals (19-6 overall, 12-3 Southland), who have already wrapped up a first-round bye in next month’s Southland Conference Tournament, are in contention for one of the top two berths in the tourney, which would mean an automatic bye into the semifinals.

The Cardinals are a perfect 13-0 in the Montagne Center this season, outscoring their opponents by an average of 28.5 points per game.

A win would be the 200th career victory for LU coach Robin Harmony, who is 199-99 all-time, including a 66-51 record in her four seasons with the Cardinals.

LU is 1½ games behind Central Arkansas (14-2 SLC) for the conference lead and a half-game ahead of Stephen F. Austin (11-3 SLC). SFA, which is at New Orleans on Thursday night has a crucial battle at Central Arkansas on Saturday.

LU comes in to Saturday boasting one of the top defenses in the nation. The Cardinals lead the country in steals per game (14.1), turnover margin (plus 9.12 per game) and turnovers forced (24.36 per game).

A big reason for the strong defensive play is sophomore guard Chastadie Barrs, who has at least one steal in all 56 games in her career. Barrs leads the nation in steals, averaging 4.56 per game. Teammate Kiandra Bowers is 35th in the country in steals at 2.60 per outing.

Barrs also leads the Southland Conference in assists, averaging 6.4 per game, good for 14th in the nation.

Meanwhile, Bowers, not to be outdone, leads the nation in offensive rebounds at 5.92 per game. Bowers, who had her streak of double-doubles stopped at six in Saturday’s win at Texas A&M-Corpus Christi is ninth in the country with 15 double-doubles this season.

Bowers averages 15.0 points per game, second on the team to Moe Kinard’s 15.7 points per game. Bowers leads the team in rebounding, pulling down an average of 10.4 per contest, good for 19th in the nation.

Houston Baptist (6-19, 4-11) snapped a four-game losing skid with a 72-68 home win over McNeese State on Wednesday night. The Huskies enter Saturday’s contest one game behind Nicholls and Texas A&M-Corpus Christi for the final two spots in the conference tournament.

Today’s game will be streamed on ESPN3 and broadcast on KLVI-AM 560.

Saturday’s game is the opener of a hoops doubleheader at the Montagne Center. The men’s game between LU and HBU is scheduled to start at 4:30 p.m.

All youth basketball players will receive one free general admission ticket to Saturday’s doubleheader when they wear their team jersey to the game. Fans will receive free T-shirts courtesy of FivePoint Credit Union.

The Cardinals close the home portion of the regular-season schedule by hosting Nicholls at 7 p.m. Wednesday. The Cards wrap up the regular season at McNeese at 1 p.m. March 4.