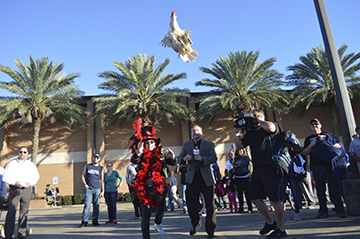 Standing in the middle of a circle of people in the parking lot of the Carl Parker Center Barbara Milstead carefully tossed “Mike” the chicken into the air.

The feathered bird wasn’t much for flying — to the delight of the chicken chasers during the first day of Mardi Gras Southeast Texas.

“I’m keeping up the tradition,” Milstead said prior to the chicken tossing event.

Milstead, a member of the Majestic Krewe of Aurora, held the same honor last year. 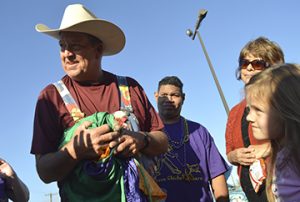 The chicken chasing event goes back to a previous event called the Courir du Mardi Gras where a masked man on horseback visited specific historical homes along Lakeshore Drive asking for ingredients for a communal gumbo. The chicken run was held at each of those stops along the parade route.

Anthony Berott easily caught the first toss of the chicken. On the second toss the chicken made its way to Mitchell Laughlin before going to Tarrance DeCuir. The group is with Griffin Living Center. 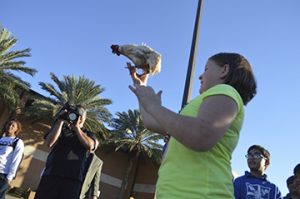 Jasmine Birge, who was with her mother, caught the third toss of the chicken.

The front parking lot of the Parker Center was filled with tables and chairs where revelers sat and listened to the Ken Marvel Band, Jivin’ Gene Bourgeois and Gene Terry.

William Creppel of New Orleans was in town with family to watch the festivities. Creppel said he learned about Port Arthur’s Mardi Gras event online.

The fun continues tomorrow with gates opening at 6 p.m. to 1 a.m.

The Gold Cart Parade and Valero Krewe of Krewes Parade begins at 7 p.m., starting at Rosehill/Seawall and traveling down Procter Street to Houston Avenue.