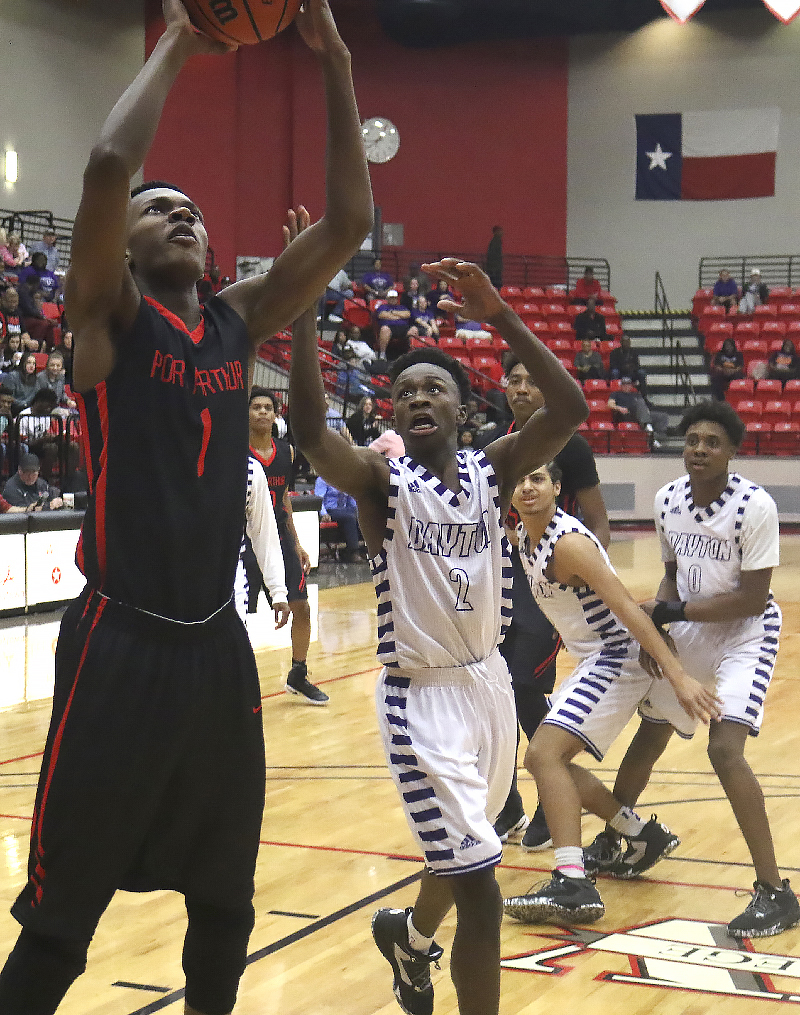 Tyler Guidry of Memorial goes up for a layup against Dayton on Tuesday in a 94-54 bi-district round victory in Class 5A. (Michael Sudhalter/Special to The News)

The scouting report may show Texas City as a very balanced team in scoring, but the philosophy of playing basketball at Port Arthur Memorial has nothing to do with any opponent, according to junior post Tyler Guidry.

“We’re playing basketball. We’re not playing a team or a certain person,” he said.

Guidry strongly believes if the Titans (26-5) play their game, they’ll have success in tonight’s 5A area round playoff against the Stingarees (24-8) at Channelview High.

It’ll be a premier matchup among second-round games in the UIL playoffs. Memorial, ranked No. 15 in 5A by the Texas Association of Basketball Coaches, is putting a 13-game winning streak on the line against 11th-ranked Texas City, which had to bounce back from two straight losses to defeat Houston Furr 66-44 on Tuesday.

“At this point, in the season, … they were in a very tough district, [and] everybody can play at this point,” Memorial coach Kenneth Coleman said. “Nobody should be taken lightly. They do things well, and we have to be on top of our game. We have to be sound; that’s the key.”

Texas City finished 13-3 in District 23-5A, just one game behind champion Fort Bend Elkins. The winner between the Titans and Stings will take on either 21-5A champ Humble or Fort Bend Marshall, which tied Texas City in 23-5A. The Stings had won eight straight before

losing to both Fort Bend teams to close the regular season.

Guidry, at 6-feet-6, looks to give the Stingarees some matchup problems in the paint. Statistics were unavailable, but Guidry is a second-year starter who’s shown all-around improvement in his game from scoring and rebounding to defense. Coleman said Guidry is continuing to get better and is one of the more consistent players on the team.

“Overall, he rebounds well, he defends well, and he stays on the floor,” Coleman said. “At one time, he wanted to jump at everything. Defensively, he can play anywhere from a 2 (wing guard) to a 5 (center). We don’t have to change personnel when we change defenses.”

That’s quite a range of positions for a player who figuratively makes his home in the paint.

“With me and our freshman Nathan [Clover] coming off the bench, we control the paint,” Guidry said. “We rebound and protect the goal.”

The Titans are in the second round a season after being eliminated in the bi-district round of the 6A playoffs, but Guidry was among a big sophomore class trying to learn quickly under a new coach.

“The most improvement we made is playing as a team and playing good defense,” Guidry said. “It starts on the defensive side and staying in tune to what we do. Once we handle what we do, can’t no team handle us.”

Dayton couldn’t, as Memorial routed the Broncos 94-54 on Tuesday at Lee College.

“I think the kids were really ready to play, they played hard and executed again,” Coleman said.

Coleman asks those driving to Channelview for the area-round game to give themselves at least 30 extra minutes of travel time due to heavy traffic along Interstate 10 East because of the rush-hour traffic.