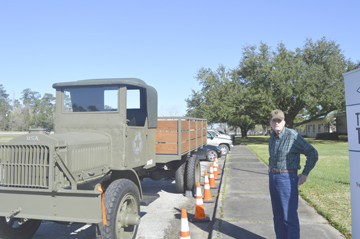 Roger Hanks, 92, of Beaumont, looks at the refurbished 1918 Liberty Truck on Wednesday morning at the TxDOT office in Beaumont. Hanks drove a truck like this with a water tank in the back in 1946 as a draglline operator from Voth to Buna.

BEAUMONT — There were 4,727,468 privately owned vehicles in the United States in 1917, according to the Federal Highway Administration. By comparison there are 248.7 million vehicles registered today.

1917 was also the year the Texas Highway Department, the forerunner to the Texas Department of Transportation, was born. TxDOT is celebrating their centennial birthday this year. In fact, the Beaumont District Office hosted a traveling exhibit on Wednesday to commemorate. The display featured historical photo panels, artifacts and a 27-foot long refurbished 1918 Liberty Truck.

Sarah Dupre, public information officer with the Beaumont District, said their office was very excited about celebrating 100 years of existence.

“The actual date is April 4. It will be celebrated year-long,” she said.

Dupre said TxDOT’s primary focus is on safety and making roads safer. She also mentioned TxDOT’s successful campaigns such as “Don’t Mess With Texas” and “Click It Or Ticket.”

The Beaumont District office was created in 1932.

Looking to the future, Dupre said TxDOT is evolving from constructing Farm to Market roads to interstate highway systems.

“We have a great future,” she said.