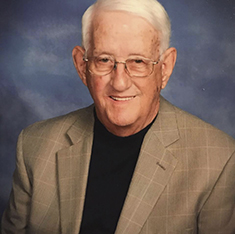 Harold Frederick Locke was born in the deep woods of East Texas on October 17, 1931. He moved to Groves, Texas with his family in 1943 during the war so his father
could find work in the booming oil business. Harold was saved and baptized at the First Baptist Church of Groves, and graduated from Port Neches High School in 1949,
when he met and eventually married the love of his life, Betty, in 1951, and raised their family of three daughters in Groves.

Harold was Public Works Director for the City of Groves for 32 years, along with his own land surveying business, which he retired from in 2014.

The defining characteristic of Harold Locke’s life was his unflappable devotion to his family, along with his quick sense of humor, unconditional love, generous
spirit, and strong work ethic, which made him an influencer of people, and allowed him the privilege of impacting generations, though he always deflected any personal
attention. He loved the Lord Jesus with a deep and abiding faith, which he spoke of until he breathed his last on February 18th.

Harold is preceded in death by his parents, William and Bertha Locke, brothers, Billy Locke, Jack Locke, and Carl Locke, and sister Rosemary Bertrand, and is survived
by his sweetheart and wife of 66 wonderful years, Betty Smith Locke, his daughters, Lori Hamilton and husband, Steve, of Nederland, Lisa Brady and husband, Johnny, of
Houston, Kelly Farrington and husband, Ed, of Friendswood, and grandchildren, Jared Hamilton and wife, Heather, of Cummings, Ga., Tyler Hamilton and wife, Jenai, of
Houston, Locke Brady and wife, Kayla, of Crosby, Dylan Brady, Jordan Brady, Taylor Farrington, Dane Farrington, Carley Farrington, as well as 8 precious great-
grandchildren, sister-in-law Evelyn Crooks and her husband, Lester, many nieces and nephews, extended family and a host of lifelong friends. Oh how he loved his
children, grandchildren and great-grands!

Funeral services for Harold will be held at the First Baptist Church of Groves, Tuesday, February 21st, at 2 pm. (visitation at 1 pm), located at 4000 Grant Ave., Groves, Texas, 77619, under the direction of Levingston Funeral Home in Groves, with burial at Oak Bluff Cemetery. Memorial contributions may be made to the Student
Ministry of First Baptist Church of Groves.

“Precious in the sight of the Lord is the death of His godly ones.” Psalm 116:15