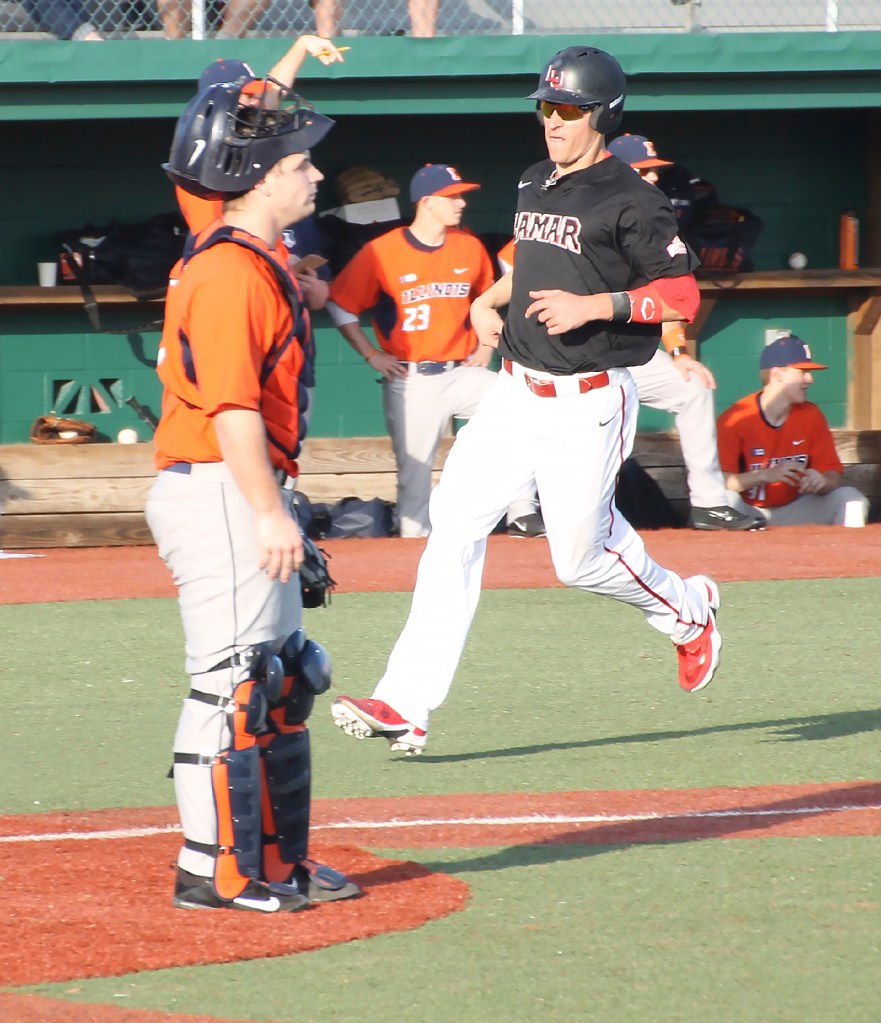 Cutter McDowell of Lamar scores on a three-run triple by Trey Silvers (not pictured) in the second inning as Illinois players react Saturday. (I.C. Murrell/The News)

BEAUMONT — Just hours after picking up a shutout win to open the season, the Lamar baseball team turned around and put on a hitting display with a 15-9 win over Illinois in the nightcap of a two-game day at Vincent-Beck Stadium in non-conference action.

Lamar (2-0), which led by as many as 10 runs twice, finished the night with 13 hits and drew nine walks – the most since it had nine against Manhattan on Feb. 20, 2015 — at the plate. The wins were the first of head coach Will Davis’ career.

“I don’t think of it terms of my career. I want it to be a focus on the team, and we did all we could do today which was go 2-0. We took it one game at a time, and it was two great wins,” said Davis. “We had good things all around.

“We did it on a shutout the first game and scored 15 in the second. That shows our versatility on any given day. We will turn the page quickly and put our attention back on Illinois trying to get a third win.”

The shutout win in the season opener against Milwaukee was the first shutout in game one since LU won 1-0 over Austin Peay in 2009. On the offensive side, 21 runs in the first two games of the season was the most for LU since it scored 25 against Jackson State in 2005.

The second contest of the day was highlighted by three four-run innings put together by Lamar. Including the two-run sixth, the Cardinals put up four “crooked number” frames. Just like he did in the first game, preseason All-American Reid Russell kicked started the offense for LU in the first inning with a single that scored Cutter McDowell. With Silvers – who reached on a fielder’s choice – and Russell on the bags, first-team All-Southland catcher Bryndan Arredondo blasted at three-run shot over the left field wall. It was the first home run of the season for LU.

After the Illini answered back with three of their own in the second, Big Red responded with another four-run frame, highlighted by a bases-loaded triple from Trey Silvers. He stepped in the box with Grant DeVore, Vincent Dellocono and McDowell all on the bags, and lined one that got by a diving Jack Yalowitz in center field. Silvers later scored on a sacrifice fly from Robin Adames.

Big Red went down 1-2-3 in the third inning, but pushed the lead to 12-3 in the fourth when it took advantage of Illinois’ inability to hit the strike zone. With one out, Ryan Thompson issued a walk to McDowell – his fifth in both games combined – to put a man on first. Silvers hit a fly ball to central, but Thompson then walked three straight batters, plunked Mike Leal and walked DeVore. With a fielder’s choice from Dellocono, Lamar put up four runs.

“Our hitters are such veterans. They are poised and not worried about getting off to a great start with their averages,” said Davis. “Cutter McDowell is a perfect example waiting until his last at-bat to get a hit, but he drew five walks.

“That is what we saw all through the fall and spring,” he said. “We have veteran guys with good approaches. They are unselfish. There was a lot of big hits from a lot of different guys.”

Every Cardinal that took the field reached base, and seven out of the nine starters in the lineup scored at least one run – led by three each from McDowell and Silvers.

Adames picked up his second RBI of the game and made it a 10-run ball game with a two-out double down the right field line that scored Silvers from first.

In the sixth, pinch hitter Brendan Satran crushed one to deep right center that fell in and scored Chaneng Varela – who reached on a pinch hit walk – and was able to score himself on the play when shortstop Ben Troike threw the ball away for a play at third base.

Carson Lance started on the hill for Lamar and worked four innings with four hits and three runs allowed (two earned). He started the game on a pitch count and was awarded the win despite not tossing the minimum of five frames.

Galen Andrews worked an inning and gave up one hit, but stranded him. Nathan Garyszwski finished the game for Lamar with 1 2/3 shutout frames with two hits and two punch outs.

The Cardinals worked through five pitchers in the contest, and nine in total in both games. Of the nine, only the starters (Tanner Driskill and Lance) worked more than two frames.

“I think everything was positive today,” he said.  “All in all, (the pitching staff) did a great job. We have a lot of guys left for Sunday.”

Lamar jumped on Illinois starter Cole Bellair, who pitched 1 2/3 frames with eight runs allowed (four earned) on seven hits and two walks. As a team, five pitchers took the hill and all but Zak Devermann and Joey Gerber allowed runs.

Against Illinois, Silvers (2 of 6), Arredondo (2 of 3) and DeVore (2 of 4) all had multi-hit games, and Adames joined Arredondo and Silvers with a multi-RBI contests.

Big Red wraps up the Cardinal Classic with two games today, the first against Illinois at 10 a.m. at The Beck. The second game of the twin bill is slated to start at 1:30 p.m.