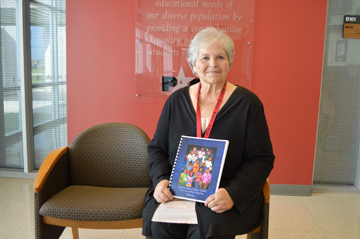 Karen Lomasney, secretary to the Port Arthur superintendent of schools, compiles a National Black History Month booklet every year on a different theme. This year's theme is "The Crisis in Black Education."

Every February, Karen Lomasney, secretary to the Port Arthur ISD superintendent of schools, goes above and beyond in compiling a National Black History Month booklet and this year is no exception.

This year’s booklet theme is “The Crisis in Black Education.”

“The theme for 2017 focuses on the crucial role of education in the history of African Americans,” Lomasney wrote.

She continued, “The crisis in black education first began in the days of slavery when it was unlawful for slaves to learn to read and write. Free blacks were forced as children to walk long distances past white school on their way to the one school relegated solely to them in pre-Civil War northern cities,” she wrote. “Whether by laws, policies, or practices, racially separated schools remained the norm in America from the late 19th century well into our own time.”

Continuing today, the crisis in black education has grown significantly in urban neighborhoods due to public schools’ deficient resources, overcrowding, achievement gaps and other issues.

“Some poorly performing schools serve as pipelines to prison for youths, and the touted benefits of education remain elusive to many blacks of all ages. Blacks have fought resistance to this crisis for centuries as exemplified by the slaves’ surreptitious endeavors to learn; the rise of black colleges and universities after the Civil War; unrelenting battles in the courts; the black history movement; the freedom schools of the 1960s; and the local community-based academic/mentorship programs,” she wrote.

The booklet’s excerpts started with Katherine Johnson, Mary Jackson and Dorothy Vaughan, the African-American women mathematicians at NASA who helped get John Glenn into orbit and returned him safely to earth.

Their lives were written about in the book, “Hidden Figures: the American Dream and the untold Story of the Black Women Mathematician Who Helped Win the Space Race.” The film version was titled “Hidden Figures.”

The booklet also contains Black History Month activities by schools in the district.

Lomasney said she likes researching and writing about obscure people most have not heard about. She also liked writing about the Rock and Roll Hall of Fame entries.

“It’s fascinating to learn about things about one’s culture one doesn’t know about,” she said.

Oil find that changed the world benefited PA too