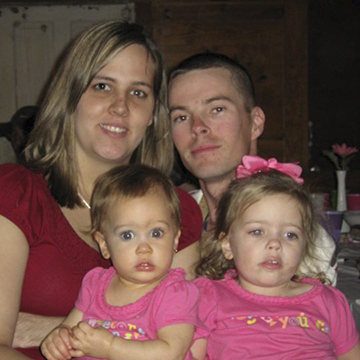 Allison Neil Clark, husband Josh, and children seen in a photo taken not long before Allison was shot to death in 2010. Courtesy photo

An Orange man has been sentenced to 35 years in federal prison for crimes related to the 2010 murder of Allison Neil Clark.

Ozzie Nelson Ibarra, 40, pleaded guilty on Aug. 9, 2016 to conspiracy to interfere with interstate commerce by robbery and conspiracy to use and carry firearms during a crime of violence and drug trafficking crime. U.S. District Judge Marsha A. Crone sentenced him on Tuesday.

According to information presented in court, beginning in 2001, Ibarra and others started robbing women in the parking lots of stores and businesses in Port Arthur. Ibarra admitted in court to committing the robberies for the purpose of supporting his crack cocaine habit. The robberies increased to almost daily between 2009 and 2011.

During the investigation of these crimes, it was discovered that Ibarra and his co-defendants were responsible for the May 2010 death of a Port Acres woman who was shot while driving on West Port Arthur Road. Once law enforcement officers became aware of Ibarra’s involvement, they were able to obtain video surveillance from area businesses that verified Ibarra’s presence in the area at the time of the shooting. Ibarra was indicted by a federal grand jury on May 4, 2016.

Clark, 24, and her then 3-year-old daughter were going to Walmart to buy diapers and a gift for a niece when she was shot while driving her Ford Excursion south on West Port Arthur Road on May 14, 2010.

She was able to bring her vehicle to a stop and put her hazard lights on before succumbing to her injuries. She was found by a passing motorist, who was also a neighbor of her parents, according to an archive story.

She had left her 1-year-old daughter at home with her husband, Josh Clark.

Port Arthur Police Officer Mike Hebert worked with the family for some of the investigation and has got to know them like family.

“For me, this is bittersweet,” Hebert said of the sentencing of one of the suspects. “Yes, it’s one step closer to closure for the family but also knowing that Allison is still not here and she’s going to miss her daughters growing up. Parents lost a daughter, children lost a mother and a husband lost his wife.”

Hebert called Allison Neil Clark’s family amazing saying they went into the courtroom on Tuesday with character and resolve.

“This is rare for me, as a 27-year officer, to consider these people friends now,” he said of her family. “We (group of officers) vowed to be there for those girls at Christmas time. A bond has formed with the family, with Josh and the girls.”

Statistics show that the spouse of a murder victim is sometimes a person of interest in the crime and Clark’s husband was once in this position. Hebert said he couldn’t imagine what Josh Clark went through at that time, dealing with the loss of his wife and raising two small daughters but through it all he cooperated.

“It amazes me the strength he has, that the family has,” he said.

Clark looked back on that time saying he didn’t have faith in police but as time went on and the investigation progressed, lines of communication began to open.

“Mike (Hebert) is basically like family in my eyes,” Clark said.

Clark also gave kudos to federal prosecutor Lesley Woods, adding that the case is coming along and justice is starting to be served.

Hebert and other investigators followed leads and tips across the state and part of the country trying to solve the case.

“I traveled as far as Mobile, Ala. We’ve been to Texarkana, Texas. We’ve been to several other cities across the state. It’s just one of those things that we were not going to stop following every lead we got,” Hebert said. “This was ultimately, a mother just going to Walmart and these people took her life. We know that in the last seconds of her life she was trying to protect her child.”

Acting U.S. Attorney Brit Featherston announced the sentencing of Ibarra on Tuesday. Ibarra is currently serving a sentence in the state penitentiary for aggravated robbery and after that sentence is completed he will be moved to a federal facility.

“The murder of Allison Neil Clark in 2010 was long held as an unsolved cold case, but it was never forgotten by detectives with the Port Arthur Police Department or Allison’s family,” Acting U.S. Attorney Brit Featherston said. “This tenacious team, joined by federal prosecutor Lesley Woods and Port Arthur Police detectives Alton Baise and Paul Arvizo, focused their time and skills to piece this case together.  Today, justice was finally served for the family of Allison, and for the investigators, and the citizens of Port Arthur who were egregiously harmed by these individuals. Ozzie Ibarra will harm no one else in the future.”

This case was investigated by the Port Arthur Police Department, Drug Enforcement Administration and Bureau of Alcohol, Tobacco, Firearms and Explosives and prosecuted by Assistant U.S. Attorney Lesley Woods.

Closure is slow to come for the family of Allison Neil Clark. Hebert knows there will be other trials in the future.

As for Josh Clark, the sentencing is not so much an ending to the case but a step.

“It’s another chapter in the book but it’s not over. We’re waiting for the rest of it to pan out and put the first part of this behind us,” Clark said. “I married into an awesome, supportive family. It’s just another day.”