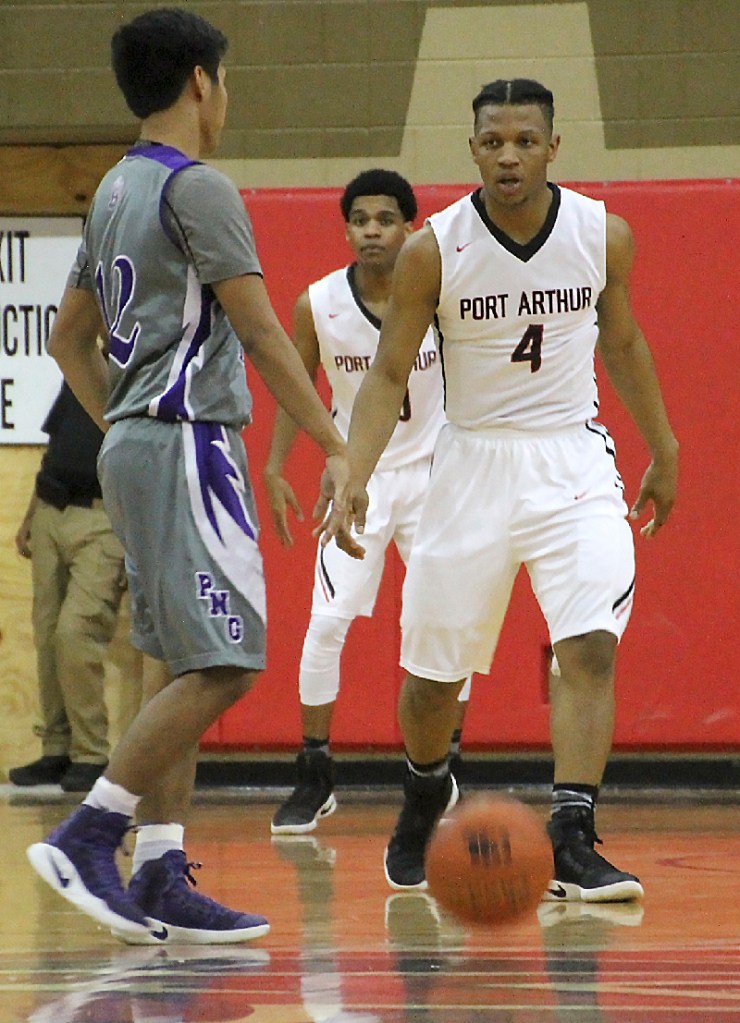 Darion Chatman and Memorial have a chance to clinch at least a share of the District 22-5A championship tonight at Livingston. (I.C. Murrell/The News)

All weekend long, Port Arthur Memorial boys basketball coach Kenneth Coleman said he didn’t want to get ahead of himself.

Memorial (24-5, 12-1 in 22-5A) is expected to earn at least a share of a district championship in Coleman’s second season tonight. There’s just the matter of playing the regular season final at Livingston, and Central and Ozen squaring off one more time at Ford Park.

Central (22-8, 12-1), which has split its season series with Memorial, can win the other share with a victory. Coleman wasn’t sure what method would be used in the event of a tie to determine District 22-5A’s top seed for the UIL playoffs, which begin next week.

“I don’t want to get ahead of myself,” he said.

A loss by either Memorial or Central will open the door for the other to win it outright. For Coleman’s Titans, that would be a long time coming.

Former Port Arthur ISD athletic Andre Boutte, now the head coach at West Brook, believes Memorial last won district in the 2008-09 season, when he joined the staff after the holiday break from Ozen. That team went three rounds deep into the playoffs, he said.

“We had a plan when I came here, and we’re just taking steps toward envisioning what Port Arthur basketball can be in the future,” said Coleman, who’s winding down his second season at the helm. “Like I say, it’s not as far-fetched as people think because I’ve seen it when we were not only one of the best programs in the state but the nation.”

“Our desire and our expectation is one of the reasons I put ‘Port Arthur’ on our uniforms,” said Coleman, a 1978 Lincoln graduate. “It’s a Port Arthur expectation, not just a Memorial expectation.”

One thing the Titans today have in common with the Bumblebees of the glory days is winning close games, Coleman said. Memorial is on an 11-game winning streak, which includes a pair of one-point wins over Ozen and Nederland. Memorial also edged Clear Springs by one in a December tournament.

“The thing about that is, you run into the people late on and they would say, ‘Man, we should have beat y’all,’” Coleman said. “Then you ask them how many state championships they won, and they say, zero. Port Arthur Lincoln has seven.”

Junior Thailan Wesley provided the latest heroics a week ago with an off-balance three-point basket with 7 seconds left in a 61-60 win over Nederland.

“Game’s not over until the last buzzer hits [at] zero, so we’ve got to do everything we can do to try to win the game,” Wesley said.

Along with clutch performances, the Titans have been outstanding on defense, even while changing from their usual full-court press to throw different looks at their opponents.

A year ago, the Titans walked into the playoffs as the No. 3 seed out of District 21-6A and were hammered by South Houston to finish 13-17. But they were still trying to grasp a new system that Coleman installed and finding their roles within it.

“We’re coming together and becoming a family,” Wesley said.

The Titans, many of whom including juniors Darion Chatman, Tyler Guidry and Reao Keller saw plenty of playing time last season, also are dominating on the glass. Senior Bishop James also has been instrumental in the backcourt.

“Everybody plays their role,” Coleman said. “Wesley doesn’t score if we can’t get the rebounds. The biggest key to our team is defending and getting rebounds.”