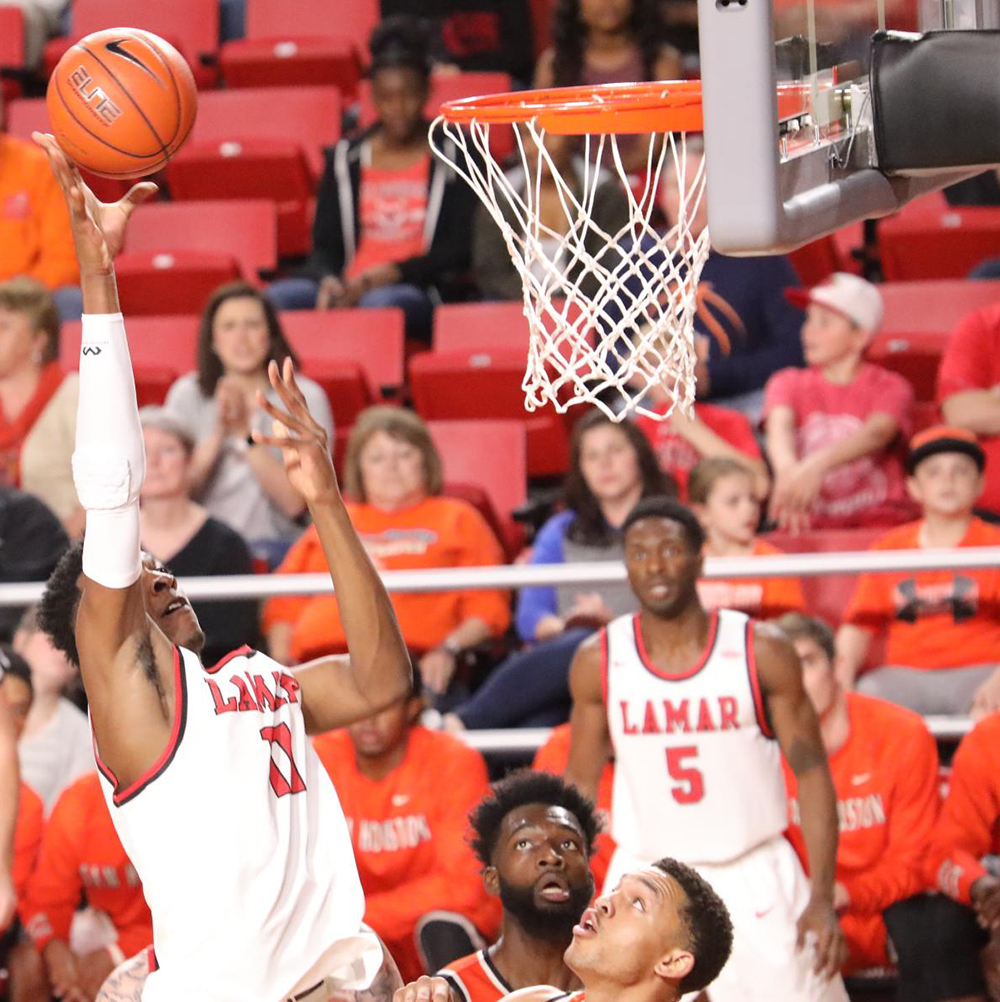 BEAUMONT – Just 48 hours after sending shockwaves through the Southland Conference, the Lamar men’s basketball team returns to action Saturday looking to continue its climb up the SLC ladder. The Cardinals will look to climb that next rung against Houston Baptist in Houston.

Winners of three straight, and four of their last five games, the Cardinals (15-9, 7-4 SLC) are in a position they haven’t been close to since the 2011-12 season. With Thursday’s victory over preseason favorite, and then league-leading, Sam Houston State, the Cardinals have moved into fourth place in the Southland standings just a half game back of the Bearkats and Stephen F. Austin, and only 1.5 games back of New Orleans.

“We didn’t win a conference title last night, or even lock up a spot in the conference tournament,” said LU head coach Tic Price. “All we did was clear a hurdle, but we have another hurdle that is just as important coming up Saturday. Houston Baptist is a very good team, and they make it very tough on opponents especially in their gym.”

The Huskies enter the weekend showdown with a 10-12 (.455) overall record and locked in a three-way tie for sixth place in the league standings with Southeastern Louisiana and Central Arkansas. Those three teams are just a half-game back of Texas A&M-Corpus Christi for fifth place, but just a game up on Incarnate Word, and 1.5 games up on Nicholls.

No team has assured itself of a spot in the Southland Conference tournament, which will be held in Katy next month. The league’s top eight teams are separated by only three games entering Saturday’s contests. First place is only separated from 13th by just 5.5 games. The only thing that is certain at this point is Abilene Christian and Incarnate Word will not be part of the tournament (ineligible due to NCAA rules on their transition from NCAA Division II to Division I status).

The simple fact that LU is in the midst of the hunt at this late date is something to admire. At the beginning of the season, Big Red was considered more of an afterthought. A game that no one had circled on their calendar – other than McNeese and that only due to the nature of the rivalry between two schools – LU was supposed to just be a win for every other team on their way to the tournament. The Cardinals were picked 12th in the preseason poll ahead of only Nicholls. Sitting in fourth place, within striking distance of first, on Feb. 10 was not supposed to happen, but someone at the conference office forgot to send that message to the men in the LU locker room.

In addition to trying to push its win streak to four games, the Cardinals will also be looking to lock up their first winning season Saturday since the 2011-12 season. For LU to get that win, it will have to come at a venue where the Huskies rarely suffer defeat. Winners of two straight and three of the past four, the Huskies are a near perfect 8-1 (.889) at home this season, with the only loss coming against Central Arkansas.

The Cardinals lead the all-time series against HBU, 9-5 (.643) but have dropped three of the past four meetings. LU heads to Houston looking for its first-ever win at Sharp Gym (0-3).

Saturday’s game opens a four-game road swing for the Cardinals. It will begin at 7 p.m. from Sharp Gym, and can be heard live on Newstalk 560 KLVI.