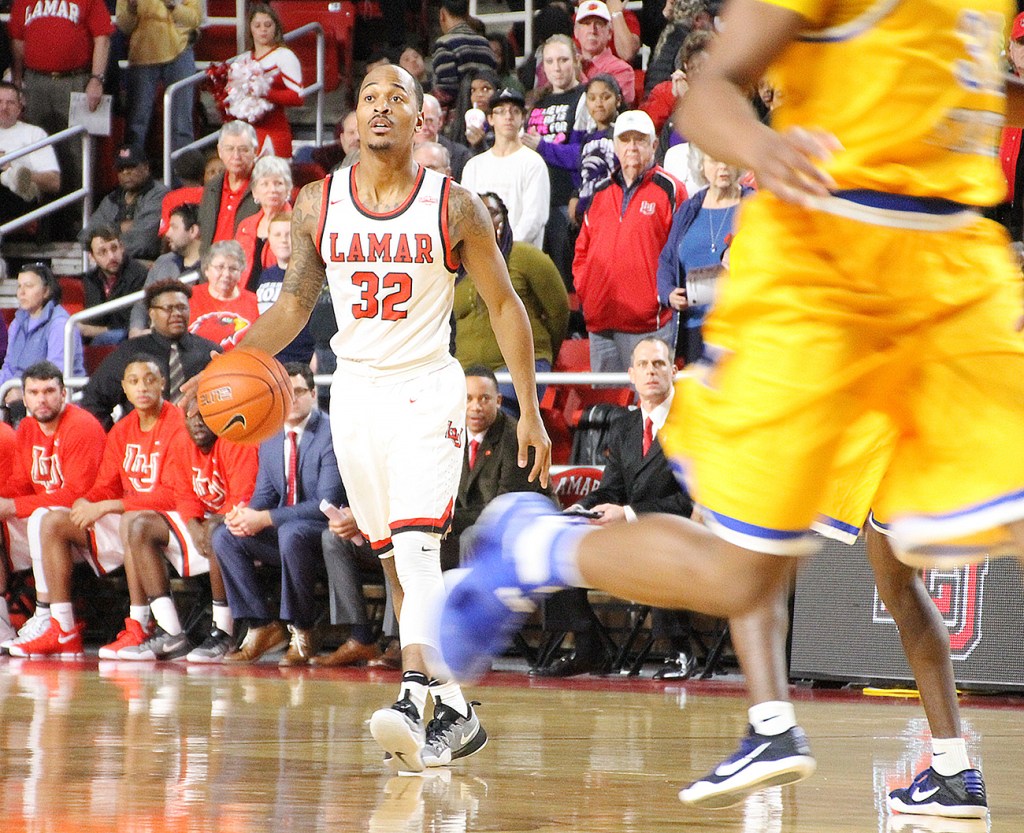 Point guard Joey Frenchwood and Lamar are coming off a route of McNeese State on Saturday. (I.C. Murrell/The News)

Currently, the Cardinals own the No. 4 seed in the Southland Conference Championship tournament – which will be held next month in Katy. Although not the prized position to be in, the 4-seed is still a valuable spot to hold. If the Cardinals remain in fourth place they will receive a first-round bye in the tournament. An extra day of rest will be gladly accepted, but it is not what LU head coach Tic Price and his Cardinals are eyeing.

With eight games remaining on the 2016-17 slate, the Cardinals still have their sights on a regular-season title.

That goal is still very much in reach for Big Red, who enters the Thursday night contest a half-game back of Stephen F. Austin in third place, and just a game and a half back of the co-leaders, Sam Houston State and New Orleans. However, teams are two-thirds through the Southland Conference race and everything is still up in the air. All 13 teams in the conference standings are separated by only 4.5 games, and LU’s hold on fourth-place is protected by only a half game over Southeastern Louisiana. About the only thing that is for sure about is that Abilene Christian and Incarnate Word are not eligible for the postseason (due to NCAA rules on transitioning from NCAA Division II up to Division I status).

For the Cardinals to remain in the conversation for a conference championship, they will need to exact a bit of revenge on Sam Houston State. The Bearkats have been rolling through the league following an 0-2 start, which includes an 87-65 decision over LU in Huntsville earlier this year. Winners in eight of their last nine games, SHSU is coming off a seven-point setback at Abilene Christian.

Even with a victory over Sam Houston Thursday, the Cardinals do not control their own destiny. Big Red will need some help when it comes to New Orleans — a team the Cardinals lost to at the beginning of the year and only play once in 2016-17. The Privateers have home contests against Nicholls, Central Arkansas, Stephen F. Austin and Southeastern Louisiana remaining, while they travel to McNeese, Southeastern, Northwestern State and Nicholls.

Winners in three of their past four games, the Cardinals would like to keep that momentum going into a pivotal part of their schedule. Following Thursday’s game against the Bearkats, the Cardinals will hit the road for four games. The road swing will include dates at Houston Baptist, Stephen F. Austin, Texas A&M-Corpus Christi and Northwestern State.

The Cardinals also enter Thursday’s game with another goal within reach. LU needs just two more wins to lockup a winning record. It would be the program’s first winning season since 2011-12. That year LU advanced to the NCAA Championships.

The LU athletics department will once again be offering a shuttle service on campus to students wishing to attend Thursday’s doubleheader. The shuttle will begin at 5 p.m., and pickup/dropoff will take place in front of Gentry Hall. The shuttle will drop students off at the Montagne Center right outside of Gate 1. The service will run from 5-6 p.m., 7:30-8:30 p.m., and 9:30-10:30 p.m.

Cardinal women go for 13-0 at home behind Bowers