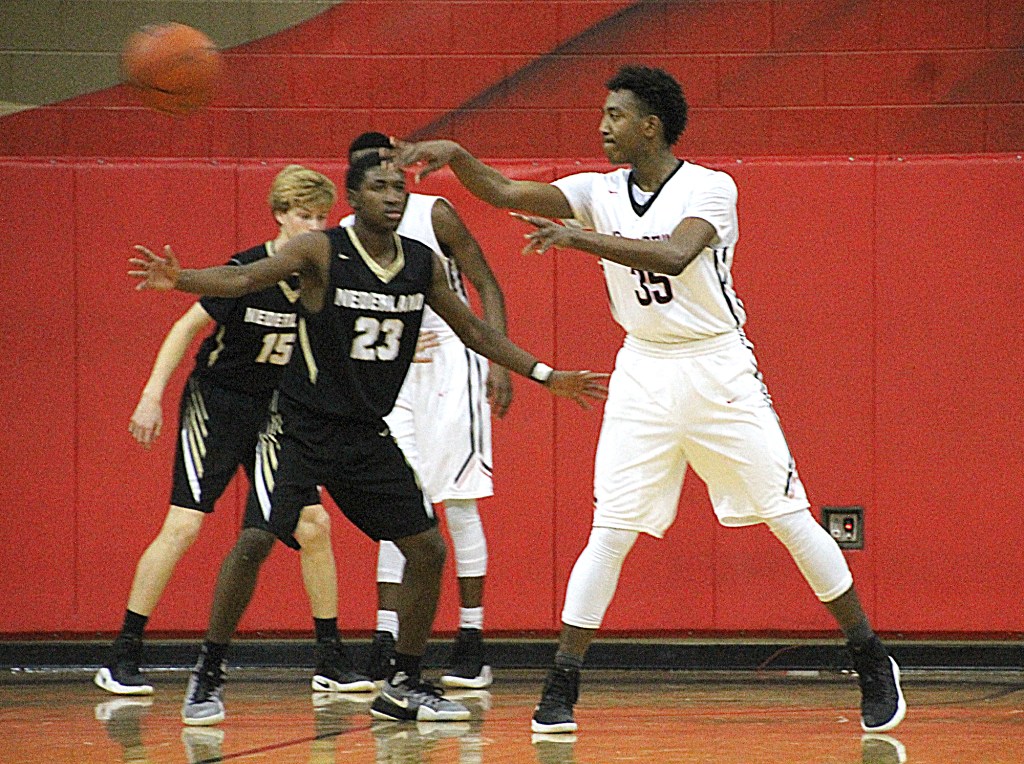 Wesley wound up making two clutch three-point baskets, including one with 7 seconds left that gave the Titans a 61-60 win over Nederland in a big District 22-5A clash.

“They just gave me too much room, and I just had to take a shot,” Wesley said.

Coleman said shooters like Wesley, who finished with 20 points, have to keep shooting.

“If we don’t want him to shoot the ball, we’ll take him out the game,” Coleman said. “That’s our philosophy right there. We always want our shooters to shoot the ball. We never want them to lose confidence.”

But Nederland was just 19 seconds away from a big win.

Darrell Jones knocked down two bonus shots to break a 58-all tie. Memorial worked the ball around the perimeter, and Wesley took a pass from the right wing and made an off-balance three-ball with 7 seconds left. Nederland called for time with 5.2 to go.

Hayden Hefner took a full-court pass and fired a contested three-point shot from the left corner that went short. The Bulldogs got to inbound the ball again after an official had to overturn an out-of-bounds call as Darion Chatman did not secure the rebound cleanly.

Chatman managed to deflect the last pass intended for Kevin Howard in the low post before time expired.

Dill accounted for half of the Jaguars’ three-pointers. Mason Senigaur had two of them in the win.

Edsel Damo carried the long-range hot hand for the Indians with three treys. He led the team with 12 points, while Derrick Papa added nine.

All seven of PNG’s players scored. The Indians had five treys.

“We made it harder than it was,” Bates said. “They are a great team, but no matter who we play, we have to find a way to beat them, open them up and attack them.”

Mackenzie Tindel chalked up the winning goal 3 minutes into the second overtime.

Daphne Reyes finished with nine saves for the Titans (5-4-1, 2-2), a sign of a standout defensive effort for Phillip Mattingly’s team.

Julisa Tejada and Arianna Fernandez were credited again for their stellar defense.

“They played high-pressure, which forced us to make errors,” Bates said. “We could never find our rhythm. We struggled finding the target. We had trouble getting in behind their defense and getting a good look at the goals.”

Libbie LeJeune had two saves in the win.

PORT NECHES — As if one scoreless PNG-Memorial soccer match in regulation wasn’t enough, the boys teams did the same at The Reservation.

Preston Riggs netted both of the Indians’ goals off Christian Davalos assists, and PNG (11-1-2, 4-0 in 22-5A) remained atop district standings.

“Memorial had some opportunities, but Chase is so darn fast,” Luttrull said, adding Gordon managed to track down Memorial’s shooters and make stops.

The Indians hit the crossbar two or three times in the first half but didn’t test the Titans’ goalkeepers in the second, Luttrull said.

“We finally started shooting in overtime. When we shoot, we have a chance to score.”

Nick Verbrekt earned the shutout win. Saul Ayon made 14 saves for the Titans.

NEDERLAND — The Bulldogs outshot the Panthers 14-2 and got off to a great start with two first-half goals by Travis Wiedenfeld off free kicks.

Logan McRae headed in another goal off Hunter Banta’s corner kick early in the second half. Banta scored off a half-volley, taking a cross from Eric Aviles, and Salvador Contreras accounted for the final goal on a breakaway.

NEDERLAND — The Titans went out as winners.

Senior Kennedi Lofton had 16 points and five blocks, and sophomore Julia Sion scored 15 points and grabbed 12 rebounds as Memorial (6-23, 5-9 in 22-5A) ended their season on a winning note. Richlyn Williams added eight points in 6 minutes during her final game.

BOB WEST ON GOLF: PNG’s Elmore looks like next…