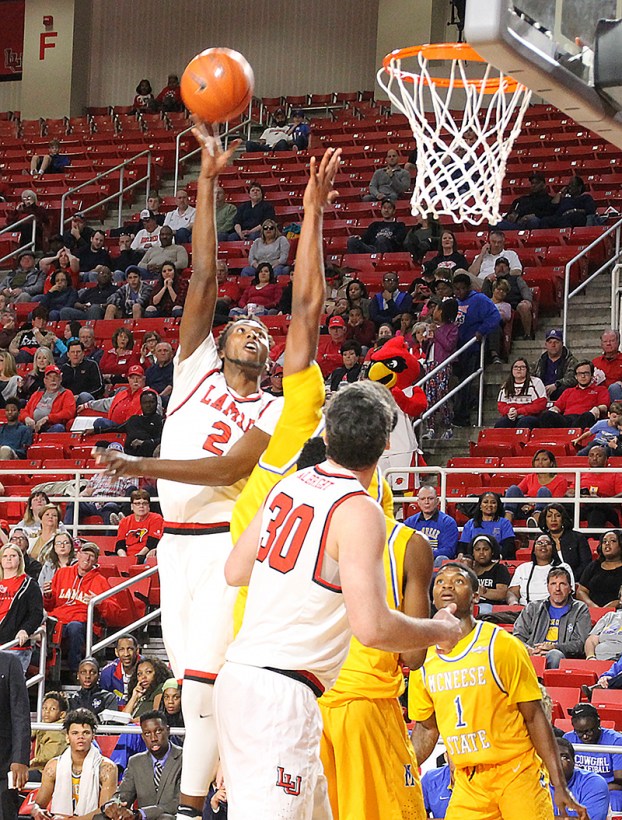 Dorian Chatman of Lamar, from Port Arthur, hooks in a shot against McNeese State in the first half Saturday. (I.C. Murrell/The News)

Cardinals take back the border 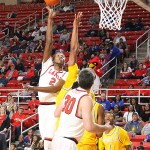 Dorian Chatman of Lamar, from Port Arthur, hooks in a shot against McNeese State in the first half Saturday. (I.C. Murrell/The News) 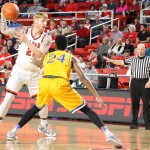 Colton Weisbrod of Lamar, from Nederland, looks for a driving lane against Lance Potier of McNeese State in the first half Saturday. (I.C. Murrell/The News) 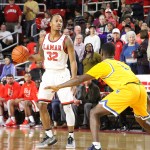 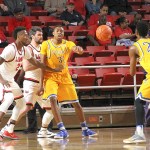 Dorian Chatman (2) and Christian Albright of Lamar force Stephen Ugochukwu of McNeese State to pass out to Lance Potier in the first half Saturday. (I.C. Murrell/The News)

BEAUMONT — Junior Colton Weisbrod scored 20 points and pulled down 14 rebounds as Lamar (14-9, 6-4 Southland) never trailed against rival McNeese State on Saturday. The Cardinals jumped out to an early double-digit lead and never looked back recording a 77-57 victory over McNeese.

The Cardinals raced out to a 16-2 lead knocking down five of their first 10 shots, and McNeese was never able to get the deficit down to single digits. While Big Red was busy torching the nets at one end of the floor, the Cowboys were struggling at the other end. LU held McNeese to a 1-for-9 (.111) start and the Cowboys finished the half just 7-of-29 (.241).

The Cardinals cooled off slightly in the second half but still shot better than 40 percent for the game, 27-of-64 (.422), while McNeese was held to just 34 percent. The Cardinals also finished the night 9-of-21 (.429) from beyond the arc.

LU dominated its opponent on the glass grabbing nearly every loose ball. LU pulled down 52 rebounds on the day and outrebounded their rivals by 25. The Cardinals dominance on the glass led to a 22-6 advantage in second chance points.

“I’m very proud of this team today,” said LU head coach Tic Price. “It was clear that both teams wanted this win badly, but we got out to a quick start and rode that momentum to victory. I can’t say enough about our effort on the glass. Everyone was getting involved, and that is the type of effort we need to win games.”

The Cardinals defense held their guests to just one field goal in the first 8:18 of the contest, a drought that finally ended when Lance Potier hit a three-pointer to cut the deficit to 11 points. LU responded with a three-ball of its own – one of six first-half triples for the Cardinals – which sparked another LU run. The Red and White outscored McNeese 16-5 over the next 3:43 to take their first 20-pooint lead of the game.

The Cards stayed on the attack pushing their lead to 26 points heading into the locker room, 44-18. LU held McNeese scoreless for the final 2:44 of the opening half.

The Cardinals saw the lead climb to as many as 28 points early in the second half before McNeese tried to mount a run. The visitors from the other side of the border trimmed the deficit down to 17 points with just over 7 minutes remaining, but LU responded by pushing the lead back up over 20.

“Our kids understood the significance of this game and taking care of your home floor,” said Price. “We also got a great boost from the crowd. I thought this was one of the most excited crowds of the season and we fed off of their energy.

“Rivalry games are fun for the fans and players, but our focus was just get a win today no matter who the opponent was. That will be our focus now as we prepare for Sam Houston State. I’m happy for our guys today, but we now have to turn our attention to the next game,” added Price.

The Cardinals return to action Thursday when they host league-leading Sam Houston State. The rematch against the Bearkats will tip off at 7:30 p.m. at the Montagne Center.

Lamar sports information BEAUMONT – Kiandra Bowers continued her dominant play as she powered the Lamar Cardinals to a 79-57... read more