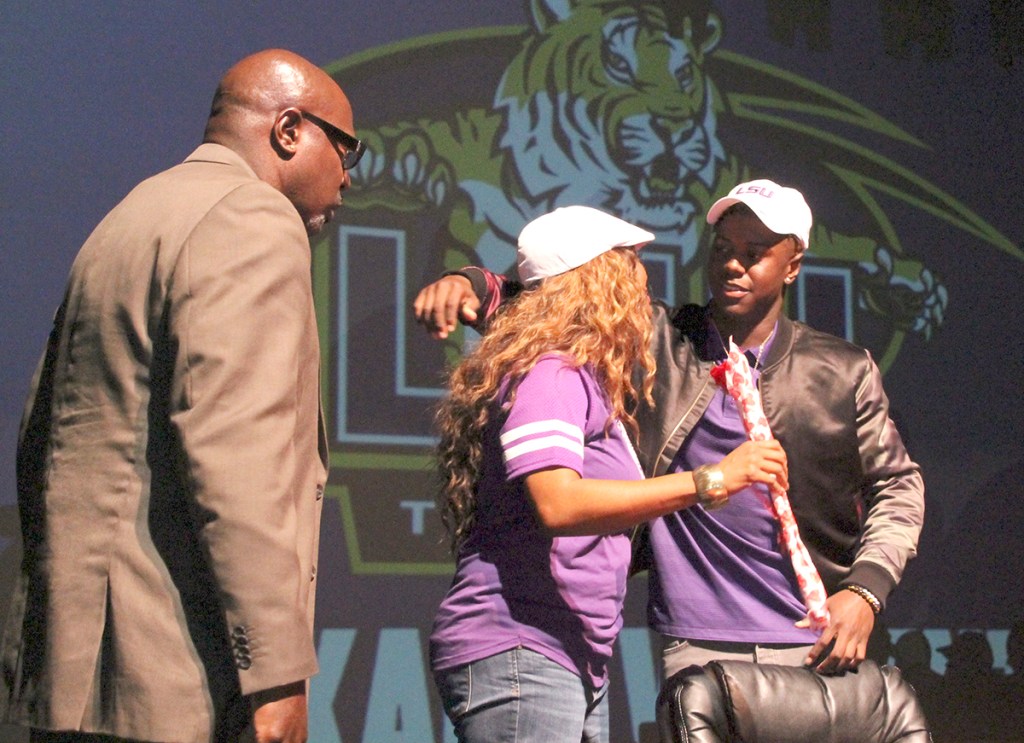 Kary Vincent Jr. of Memorial, donning an LSU ballcap, hugs his mother as his father, Memorial cornerbacks coach Kary Sr., looks on Wednesday during a ceremony at the MHS auditorium. (I.C. Murrell/The News)

The atmosphere is usually only reserved for a rock concert, but at Port Arthur Memorial, it’s serious business.

One by one, each football player signing to play with a college — any college — literally enjoys his moment in the spotlight. He makes his grand entry down one aisle to the stage, greets his loved ones with a rose and introduces himself to his next team donning the hat of his chosen introduction.

Add to that a hand sign or two after the pen is put to paper, and that is how National Signing Day at Memorial goes.

“It’s crazy,” said LSU-bound cornerback Kary Vincent Jr., the four-star, 23rd-ranked player in the ESPN 300 national recruiting rankings who’s also its No. 2-ranked cornerback. “Some people will say I brought all these people out there. We’ve got great alumni, great students and great athletes. They love us and we love them back.”

On Wednesday, new Louisiana-Lafayette quarterback Kadon Harrison and Vincent were the main attraction. But, in all, 11 Titans signed letters of intent.

It’s not uncommon for Memorial to turn out a large group of signees each season. It’s an annual goal for head coach Kenny Harrison, Kadon’s dad.

And he reminded the students who filled the MHS auditorium to get as loud as they wanted for every signing, often citing the ceremony as a positive for the city of Port Arthur.

“The reason they say negative things about Port Arthur is because we’re doing great things with great kids at a great school,” he said, reminding the crowd of Memorial’s 4-0 mark against their Jefferson County 5A rivals last season. “They don’t have a trophy for us, but we know who really won it.”

A Super Bowl touch was added to this year’s signing ceremony. Elandon Roberts, a 2012 MHS graduate and rookie New England Patriots linebacker, congratulated each of the signees in a video message.

Vincent’s signing concluded a month of highlights, including appearances in the Under Armour All-America Bowl and the North American Championship, where his U.S. under-19 team defeated Canada 33-11 this past Sunday. Both games were held in the Orlando, Fla., area.

“Really, I was just making the most of my opportunity, going out and meeting new people,” Vincent said. “I love making new relationships. That’s what it was.”

But Vincent didn’t use his trips to make a case for another school to lure him from Ed Orgeron’s first signing class with the Tigers, who are coming off a win over Louisville in — of all places — the Citrus Bowl in Orlando.

Still, there was one thing that could have stopped him from signing.

“The only way I would have changed my mind is if LSU canceled their football program,” Vincent said. “If that had happened, I wouldn’t have gone anywhere else.”

Harrison, a three-year starter at quarterback, provided one of the more emotional moments of the ceremony when he got to hug his father on his way to the table. Kenny Harrison didn’t hide the pride in seeing his firstborn taking the next step in his career.

“Through everything that goes with being a coach’s son, the last two years have brought us closer, and we’ve embraced that,” Kenny Harrison told the audience. “He’s not only my son, but because of that, he’s my best friend as well.”

Said Kadon Harrison: “Just being here and watching as a kid guys come up and sign, it’s a special occasion with my mom, my sis and my dad.”

Louisiana, of the Sun Belt Conference, offered Harrison prior to this past season, when he finished the regular season with 1,740 passing yards and 21 touchdown passes.

The coaches told Harrison he could make a huge impact on a team fresh off an appearance in the New Orleans Bowl.

“I love the coaching staff up there. They showed me it’s a great home to be the next four years,” Harrison said. “So, I just wanted to commit.”

It was a moment Kenny Harrison, Memorial’s coach since 2009, had look forward to since Kadon was little.

“I can truly say this is one of the most blessed days of our lives, to get an opportunity to be with my son and to introduce him.”