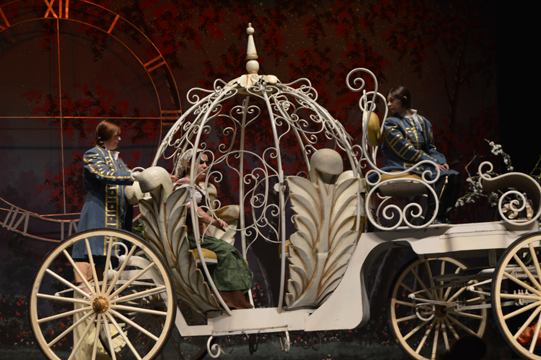 Cinderella gets whisked away on a magical stagecoach at the NHS Performing Arts Center. (Lorenzo Salinas/The News)

Let the curtain rise and wishes from one’s fairy godmother come true because a perennial favorite is coming to Nederland High School.

The Nederland High School (NHS) Performing Arts Department will be presenting Rodgers & Hammerstein’s “Cinderella” at 7:30 p.m. on Feb. 3 and 4 at the NHS Performing Arts Center on 2101 18th St. in Nederland.

Doors open at 7 and tickets are available only at the door. Tickets are $7 for adults and $5 for students. Only cash or checks are accepted.

When one speaks to the cast of students about the play and their roles, the level of enthusiasm they have for them is almost palpable.

Jones is a 1st-grade student at Langham Elementary. She said her favorite part of the play is the first part, where Cinderella first appears as a child and meets her fairy godmother. 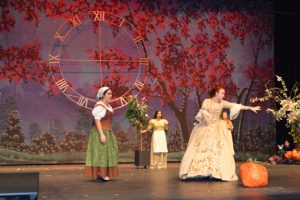 For others like high school junior and “real” Prince Charming, Brady Spell, performing seemed to be a labor of love.

“I started (performing) in my freshman year,” Spell said. “When I actually had time to do it over the summer.”

And even though Spell said he has not had as much time as he used to, performing in theater has become a priority and thus a passion for him.

“I’m still doing it because I like it. I’ve always liked performing.”

In fact, Spell said he hopes to make a professional career of performing in the future.

Likewise, Spell found an affirming moral to the play he and his fellow cast members had been rehearsing for weeks:

“It shows that people from all walks of life need love no matter what their situation is.”

“It’s my last year here and I wanted to make it amazing,” Pena said.

“Cinderella” marks his third play to perform in.

“I started as a freshman because Ms. Kloes wanted me to open up more,” Pena said. And in his opinion, he has done just that.

Pena said he has seen all of the Disney stories and watched the original “Cinderella” in choir class.

“The play (we’re doing) has some similarities, but it’s an amazing show on its own,” Pena said. “The characters are more their own persons.”

In relating just how fleshed out the characters are, Pena described his own character, King Maximilian, in thematic terms.

“He’s a father who just wants what’s best for his son,” Pena said. “He wants his son to be happy and he sort of helps compromise with him on how to make it happen.”

“It’s funny because we’re basically the exact opposite of (those names),” Flowers said.

Scott is a sophomore and member of the NHS Concert Choir and the show choir Ned & Company; Flowers is a junior and a member of NHS Theatre Pro.

“We’re basically the goofballs of the story,” Flowers said of their characters. “We’re the humor of the entire show.”

“We lift the whole show,” Scott said. “It’s all about how harsh and cruel the stepmother is to Cinderella, but we’re not really anything like that.”

“We’re kind of dumb,” Flowers said with a laugh.

“I actually have a horrendous laugh,” Scott said.

When discussing previous versions of the story in movies, plays and books, both students said they have seen some version of “Cinderella” before.

“This is more true to the Disney version,” Flowers said. “The (audience) can learn from the story you can always live your dreams if you believe in yourself.

“Her fairy godmother rewards (Cinderella) for believing in her dream — and while her stepmother tells her she can’t do anything, she proves everyone wrong.” 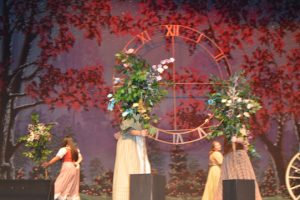 Strong character work appeared to be a constant for all those involved, as high school junior Baylee Arnold discussed her role as the Queen and mother of Prince Charming.

Arnold is also a member of the NHS Choir and Ned & Company, the latter of which she said helped prepare her for her first time in a musical play — this weekend’s performance of “Cinderella.”

“I’m much less nervous than before and ready for Friday and Saturday,” Arnold said.

When asked what she hopes the audience takes away from their weekend performances, she said, “I really hope they see the hard work we put into it, and how we put our all to make something beautiful.”