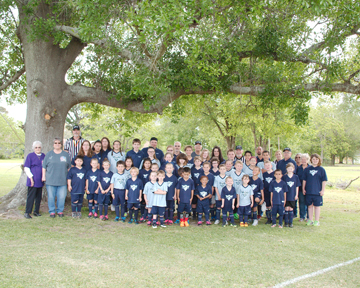 The Upward Soccer kids and volunteers at Calvary Baptis Church in Port Acres. Both the soccer and Upward Basketball at Hillcrest Baptist Church in Nederland are a ministry in addition to just sports clubs.

It seems soccer is growing in popularity not only nationally, but also in Southeast Texas as youth leagues keep popping up.

One such league formed three years ago is Upward Soccer at Calvary Baptist Church, 2208 Canal St. in Port Arthur.

Vicky Senn is a retired children’s minister. She said the Lord lay on her heart to start Upward Soccer.

“It’s fulfilling to have one-on-one contact with kids and parents. Regular soccer is so competitive at 4 years old,” Senn said.

She said soccer is relatively new to Upward Sports.

The league is for players 4 years old to the eighth grade. There’s a one one-hour weekly practice and one game per week. The season is eight weeks long.

Tournaments are scheduled on Tuesdays because some of the players are Seventh Day Adventist who worship on Saturdays and they can’t make Saturday tournaments. The league, Senn said, reaches out to all denominations.

The younger ages play four-on-four and they don’t keep score. There’s no goalie until the fifth grade. All of the games also have an eight-minute devotional.

There are four fields at the church and each of the fields are smaller for the younger children. Coaches can also go on the field for the 4-and-5-year-old players.

“It should be a team effort,” Senn said. “We had 58 kids last year enrolled. The school districts have been really good by passing out our forms.”

The players can earn rewards and earn stars for areas such as sportsmanship and attitude as a team. She said each team’s goal is to earn all of the stars. There’s also an awards celebration at the end of the season.

In addition to looking for players, the league is in need of coaches and referees, too.

“We hope everybody will come out and give it a try,” she said.

Hillcrest Baptist Church of Nederland, likewise, has been participating in Upward Basketball for 15 years. They are in the third week of an eight-week season, according to Jim Johnson, minister of education.

Johnson said it takes much work from the volunteers before and during the season.

“We start getting ready in September,” he said. “The kids seem to enjoy it. We have from 80 to 110 kids playing. It’s a ministry worth having.”

Johnson described the Upward Basketball as a safe environment where the children are not yelled or cursed at and they’re not afraid of their coach.

All of the children play the same amount of time — two 18-minute halves. They then take a break and rotate players.

All of the coaches, officials and concession stand workers are volunteers.

“Hopefully the kids are learning to play basketball while we’re sharing the Gospel message of Jesus,” he said.

As with Upward Soccer, the basketball program practices one hour a week, play a one-hour game and they have a brief devotional.

Hillcrest also has Upward Cheerleading during the games.

Johnson has been at the church for 15 years. In 2002, one of the former pastors heard about Upward Basketball. Some people from the church travelled to Little Rock, Ark. for training to get it started.

There’s an award night at the end of the season in the church’s auditorium. All of the children get the same awards such as a backpack or a basketball; something they can use. This year they scheduled a ventriloquist from Upward Sports on March 6.

He added, though, they are trying to improve with their basketball skills and practices are organized before the season begins.

“We’ll keep this as long as it’s a viable ministry and numbers are up,” he said. “People in the past have been brought into the church through this (Upward Basketball).”

“It’s an opportunity to do outreach because we get to meet with the parents and with the children. The Gospel aspect is very important.”