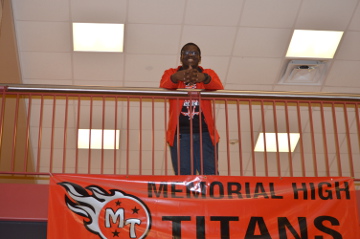 “Balancing organizations with schoolwork and family obligations gets tough but I like to set reminders for myself,” Daniels said. “And I depend on my parents for a lot.”

Daniels is band captain, a section leader and also takes part in University Interscholastic League competitions besides marching band obligations. The versatile student also takes part in UIL choir competitions as well. He’s a member of the National Honor Society and a member of the Kappa League, which is sponsored by the Kappa Alpha Psi Port Arthur Chapter and is a former of the Port Arthur Youth Advisory Council.

Daniels, who began playing trumpet at a young age, plays the baritone or euphonium. The instrumentalist gives kudos to band directors Trent Johnson and Alex Frazier for seeing the potential in him and helping him transition to his chosen instrument.

This second semester of the school year is a time when students began to focus on various competitions. Daniels is preparing for UIL choir and band simultaneously.

“He has a very high aptitude in music, both band and choir and excels very well in both areas,” Ingram said.

Ingram said Daniels has received numerous superior ratings in UIL competitions in both band and choir in addition to being a leader.

“He’s a great leader among his peers and is well respected,” Ingram said.

Daniels hasn’t chosen a university yet but has some options available.

“Prairie View A&M is an option. I’m not saying it’s a family tradition … though. My family all went to Lamar (University) but my aunt and my mother earned their masters from Prairie View,” Daniels said. “I want to try and keep an open mind. I don’t want to miss any opportunities.”

Daniels is also interested in applying to Southern University in Baton Rouge, Louisiana. His assistant band director Frazier is a graduate of the university and the MHS Marching Heat has participated in various competitions at the school.
He is looking to apply for a scholarship in band or choir and with that he will major in computer science and minor in finance.

The decision to major in computer science isn’t random.

“Computer science is probably one of if not the fastest moving career fields. When I thought of careers and what is available when I graduate I thought of computer science,” he said. “Technology is ever changing and it’s best to major in something you know you can get a job in and there are so many options.”

Daniels calls his parents his biggest supporters. His mother is there pushing him to success and his father also joins in any time there’s a band booster meting or other obligation.

He is a strong member of Mount Sinai Missionary Baptist Church where he also sings in the church choir. While at the church he has found himself being a role model to others.

“I’ve been asked to mentor others and in talking to them I tell them to keep God first. It’s very important to me to have God in my life,” he said. “And be respectful to everyone around you. You don’t know who will see you or talk to you.”

Daniels related a story of when he was in fifth grade and a local TV station featured him in a segment as a star student. At that time he had wanted to become a neurosurgeon, like Dr. Ben Carson. A woman saw the broadcast and was so touched by his story that she gave him a book on Dr. Carson, something he said is one of the best gifts he’s ever received.

“And lastly, you have to stay on top of your grades. That’s what divides you from where you come from is your grades and how you move on to higher education,” he said.

Jeremy Daniels is the son of Ariana and Terry Daniels.