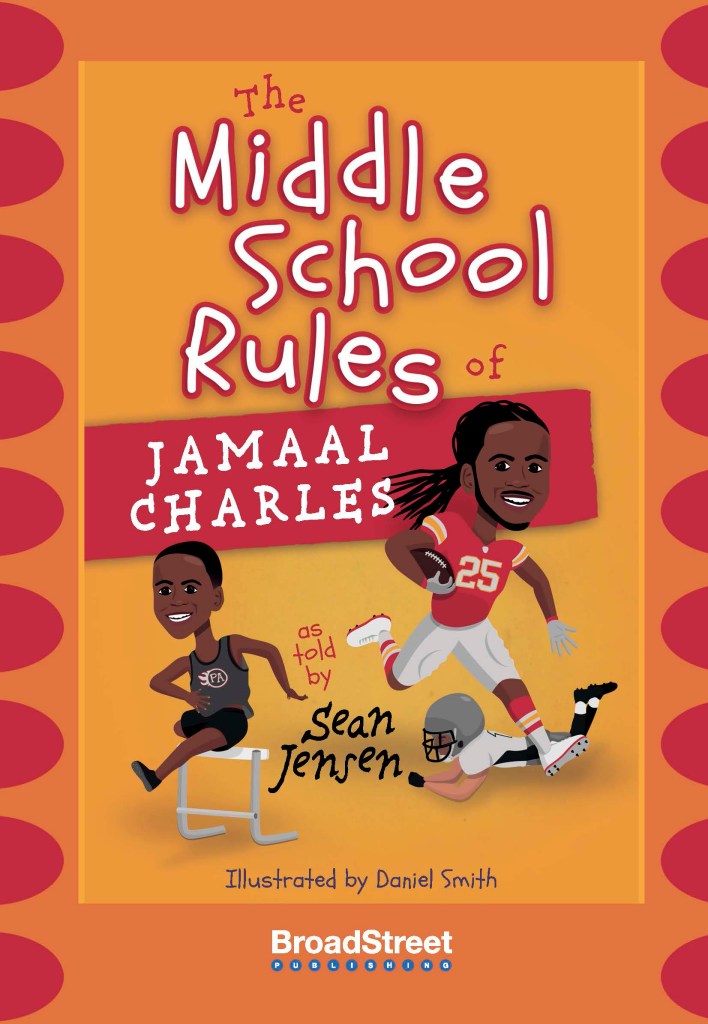 It is no secret Port Arthur Memorial graduate Jamaal Charles has quite the story to tell about his life.

He has gone from a young boy who cried a lot and could hardly read to a star running back for three schools and three different levels, the last and current step being the NFL.

His story is detailed in “The Middle School Rules of Jamaal Charles,” as told by Sean Jensen. It is the fourth part in a series of books that describe what athletes were like before they were even in high school.

“We as sports writers, the first time we usually hear about these athletes is in high school,” Jensen said on his thought process in starting the series that previously featured retired NFL players Brian Urlacher and Charles Tillman and the WNBA’s Skylar Diggins. “What were they like before that? By eighth grade, the kid’s personality has come out. When you look at Jamaal Charles, if certain things did not go the way they did, he might not have ever made it and not many of us would know who he is.”

Amazon.com is out of stock of the book and has it listed as a bestseller in the teen/young adult category. The book hits shelves Feb. 1, but it can still be ordered at BarnesandNoble.com and for later shipping at Amazon.com.

It details Charles’ struggle with a learning disability that led him to being put in special education classes for most of his primary education years.

Jensen describes him as a sensitive kid who shed tears when his older brothers and cousins teased him. Charles was always close to his grandmother Mazell and mother Sharon.

Charles, No. 25 for the Kansas City Chiefs and the NFL’s all-time leader in yards per carry, was a momma’s boy and later a grandma’s boy.

It is Charles’ family that helped guide him through many years of struggles not many people know he went through without ever reading the book.

Jensen’s book chronicles a period in time when Charles’ brothers and cousins picked on him because he was the youngest, smallest and most quiet out of the group.

“They pick on him for a couple of reasons: he cries when he gets mad, and his name is funny,” the book says.

Jamaal was soon turned into “Ja-Millie” by the older boys. So began a youth of always trying to prove himself to others.

Where Jamaal broke through was sports, and first it was track. Charles’ athletic career actually got off the ground at a Special Olympics meet in Beaumont. He brought home several medals.

“Track opened my eyes to the world,” Charles said in an interview with The News on Saturday. “I was able to tack trips to Nebraska, then to New York, then to Canada and finally Miami. I saw for the first time there was more out there in the world.”

All Charles wanted to do was fit in, but his learning disability and sensitive personality did not allow it.

“I wanted to fit in so bad,” Charles said. “That came through athletics. I had a hard time doing an English report in front of the class, so the only way I was going to fit in was to show people my talents.”

One of the biggest points made in “The Middle School Rules of Jamaal Charles” is the fact Charles overcame the bullying, the death of his grandmother and his learning disability.

“I saw Jamaal’s speech at the opening ceremonies of the Special Olympics and that sealed the deal,” Jensen said. “I love Jamaal’s authenticity and the fact he is a real person.”

Memorial teammate and former NFL player Danny Gorrer saw this change firsthand. He admitted there was a time he was one of the ones who did not always want to hang out with Jamaal.

“The change football had on Jamaal’s life is mind-boggling,” Gorrer said. “There was a time nobody wanted Jamaal around. There was one guy who always brought him around, so we always picked on Jamaal.”

Things started to change in guys like Gorrer when Jamaal started to become one of the best running backs in the state.

“It was really shocking to see firsthand,” Gorrer added. “I can say it was a blessing and honor to be around Jamaal.”

Charles in the book tells readers of other hard times even after he started to excel with the Titans. He went on to become the all-time rushing leader in Port Arthur ISD football history.

He gained a football scholarship to Texas, but getting to Austin was not easy.

Then came the NFL Draft.

Charles brings readers into what the draft was like and how what should have been a joyous occasion turned into yet another hurdle he had to climb over.

The struggles and challenges did not end in Texas. He has had three serious injuries in his nine-year career, and a knee injury in 2015 limited his play this season.

It also has called into question how much more Charles has left in the tank.

“Retirement does cross your mind,” Charles said. “I have asked myself if I want to keep doing this. God is the only one that can shut this door and he is the one who opened this door.

“Leaving football would not be the end of the world for me. At this time, Jamaal Charles wants to play football again, but football is not going to define me. Playing in the NFL was a dream that I have been able to check off the bucket list. I want to start working on checking off that next one.”

One thing is for certain, Charles can look to his friend and former teammate for any help he ever needs. Gorrer went undrafted after his days at Texas A&M.

Gorrer had stints with six teams. Two different times each, he was with New Orleans and Baltimore.

He last stepped on a NFL field in 2014 as a member of the Ravens. Gorrer is now a process operator at Motiva and can often be seen at Memorial practices working with the Titans football team.

“I don’t think I could have got over the things I have personally gone through without first my family and then Jamaal,” Gorrer said. “J [Jamaal] always told me to look at the benefits the NFL gave to me. He reminds me I wasn’t supposed to be there to begin with. I had six years in the NFL.

“Now, it is my turn to remind him that Jamaal Charles has already beat the odds. You have to take the good and the bad. There is no reason to get down on a situation you can’t control. We are not ‘Yes man’ guys with each other. That speaks volumes of the relationship you have with someone when you can tell them the honest truth.”

Jensen said he loved his time with Charles and hopes readers of “The Middle School Rules of Jamaal Charles” take in more than just his accomplishments on the football field because there is a lot more to Jamaal than a game.

“It is not that these people are just pro athletes,” Jensen said. “I want to celebrate their dedication. Charles and the others have a dedication to continue their dreams. If somehow Jamaal was to never play football again, he had a remarkable career. Jamaal Charles is going to be fine and he is going to make an impact on a lot of people’s lives outside of football. He has a big story to share.”