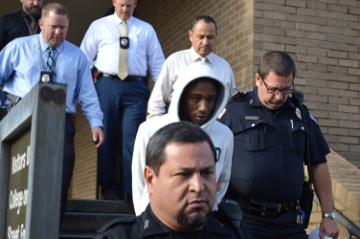 Demarcus McGhee, of Port Arthur, is escorted by Beaumont police officers and detectives to a waiting patrol car after being arrested for the Jan. 17 shooting death of Port Arthur resident James “Champ Joe” Jones on Thursday. Mary Meaux/The News

BEAUMONT —A Port Arthur man was arrested on a murder warrant for Tuesday’s shooting death of another Port Arthur man outside of a Beaumont apartment complex on Thursday.

Demarcus McGhee, 20, was taken into custody in the 7100 block of Lewis Drive in Beaumont. He was brought to the Beaumont Police Department where he met with detectives before being taken to the Jefferson County Correctional Facility.

McGhee, who was wearing a white hoodie and jeans, did not speak with media on site as he was escorted to the waiting BPD vehicle.

He is a suspect in the shooting death of James Jones, 26. Jones went by the nickname Champ Joe, BPD Officer Carol Riley said.

“Our specialized units and several different officers worked tirelessly to take into custody Demarcus McGhee for the murder of Champ Joe,” Riley said.

Jones was found dead of a gunshot wound in a black vehicle at an apartment complex in the 6000 block of Alpine. A person returning home saw the man slumped over in a vehicle and reported it to police.

Police were initially called to Anchor Church, 6655 FM 105, at 6:27 p.m. Jan. 17 in reference to a man who said he’s been shot in the face. The man, a 26-year-old Port Arthur resident, had been shot with a small caliber handgun. He was brought by Beaumont EMS to Christus St. Elizabeth Hospital for a non-life threatening injury.

Officers were investigating this incident when they got the call of the man slumped over the wheel.

The two incidents are related.

Riley said the three men had been in the vehicle together and that a possible motive was robbery.

Police did not give specifics on the crime but asked that those who may be involved in criminal activity to make a change.

“It’s terrible, these guys are so young to lose their lives not only to murder but to incarceration,” she said. “It’s not the path to take. Seek guidance.”

Riley said if someone knows of information about a crime or if they belong to a group who has discussed committing crimes to call Southeast Texas CrimeStoppers.