Local Republicans in Washington for inauguration 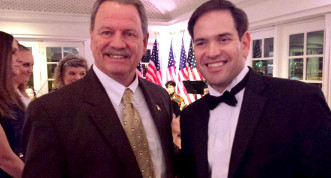 Local attorney and legal counsel for the Jefferson County Republican Party Rick Williams, left, stops for a photo with Sen. Marco Rubio during a reception in Washington, D.C. on Wednesday. Williams is among a group of locals who will attend Friday’s inauguration. Courtesy photo

A group of locals are in Washington, D.C., to watch as history is made with the inauguration of the country’s 45th president, Donald Trump.

Rick Williams, local attorney and general counsel for the Jefferson County Republican Party, and his wife, Amy, are among some of those who will be in attendance on Friday.

“Southeast Texas is very well represented,” Williams said via phone prior to entering the Black Tie and Boots Inaugural Ball, sponsored by the Texas State Society of Washington, D.C., on Thursday.

The Williams’ and other local Republicans spent time Wednesday night at the 58th Presidential Inauguration’s Congressional Reception and Candlelight Dinner at the prestigious Hay-Adams where they had a view of The White House.

Williams had a chance to meet, and take a photo with, Sen. Marco Rubio.

A few of the other locals in D.C. to witness the event are Beaumont Mayor Becky Ames, chairman of the Jefferson County Republican Party Garrett Peel and vice-chairman Judy Nichols, Dr. Ray Callas and former Judge Cory Crenshaw as well as representatives of the Golden Triangle Republic Women’s group.

Williams said the streets near the Capitol were beginning to be shut down in preparation of Friday’s events and that more than 28,000 law enforcement officials are in D.C.

“My wife, Amy, has said it is surreal to be here. Every time we get into a car to go somewhere, drive past the Senate building, the Lincoln Memorial, see the Washington Monument and the White House,” he said. “We are seeing history being made.”

Trump, soon to be America’s next president, is the president of the nation.