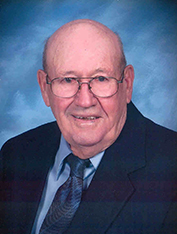 Clayton John Daenen passed away on Wednesday, January 18, 2017, at the age of 96, at the Medical Center of Southeast Texas.  He was a loving family man and friend to many and will be dearly missed.

Clayton was born on January 24, 1920, in Alexandria, Louisiana.  He was the oldest of 5 children born to Henry and Annie Daenen.

He married the love of his life, and dance partner, Agnes Guidry, on August 29, 1939. Clayton and Agnes enjoyed traveling throughout their 69 years’ of marriage, especially to the Hawaiian Islands.  He also served his country proudly in the Coast Guard from 1942 to 1945.  Clayton retired from Gulf Oil after 35 years’ of service to his beloved farm in Vidor, Texas, where he could garden and raise cattle.  Clayton was an avid outdoorsman whoenjoyed spending time with his family, whom he loved and supported fearlessly.  He was also a proud member of The American Legion Post #0817. He was a member of St. James Catholic Church.

Clayton is survived by his son, Thomas (Jan) Daenen; grandsons, Bryan Daenen and Geoffrey (Summer) Daenen, both of League City, Texas; great grandchildren Sierra, Alexis, and Clayton Robert Daenen; his sister, Angeline Herpin of Port Arthur, and numerous nieces and nephews and many friends. Clayton was preceded in death by his wife, Agnes, and son, Jon.

Memorials: In lieu of flowers, the family request contributions to the Alzheimer’s Association or to the Wounded Warrior Project.

While the world has lost a wonderful and caring man, heaven has gained a beautiful soul.