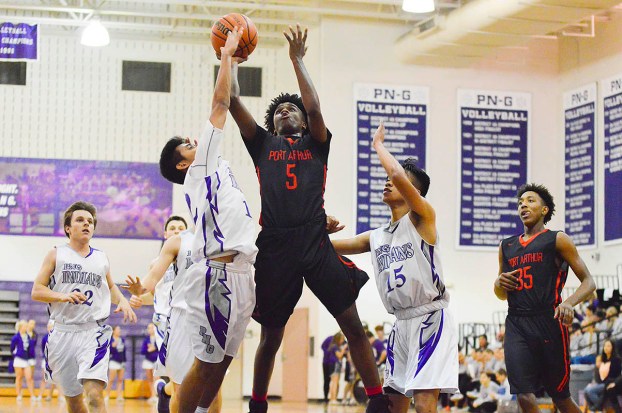 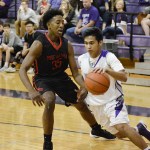 Port Neches-Groves’ Edsel Damo drives past Memorial’s Thailan Wesley in the first half of Tuesday’s 65-42 Titans’ victory at The Reservation. (Gabriel Pruett/The News) 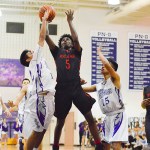 PORT NECHES — Port Arthur Memorial coach Kenneth Coleman knew his team had a good night shooting but he didn’t know his Titans were deadly Tuesday behind the arc.

The Titans used 13 three-pointers to take down Port Neches-Groves 65-42 at The Reservation.

Memorial (17-5, 5-1 in District 22-5A) had seven treys in the first half, six in the second quarter, and led 37-19 at the break after the Indians made things interesting in the game’s first 8 minutes.

“I really wasn’t paying attention to that,” Coleman said after learning his team hit that many threes. “We probably took too many, to say the truth. We have a tendency to do that. I am surprised by that number. That is a good number. We needed to be hot because Port Neches-Groves came out to play.”

The Titans have won four straight since losing 64-62 to Central on Jan. 3.

Memorial junior Thailan Wesley, who had two threes of his own and 13 points, took a step back when he heard the amount of makes behind the arc for the Titans.

“We started feeling our shots and we got hot out there,” Wesley said. “Coach told us to keep shooting and that is what we did.”

PNG (6-14, 2-4) hung tight with the Titans in the first quarter thanks to six points from Edsel Damo. He finished with a team-high 13 points.

The Indians trailed just 15-11 heading into the second quarter.

“We didn’t want to pressure early,” Coleman said. “We wanted to work on some things. PNG showed a lot of resistance so we had to go to the press a lot earlier than what I wanted to to try to create some separation. PNG did an excellent job. My hat is off to Coach [Pat] Abel.”

The second quarter is when Jyson Bulter and Wesley started to heat up. Wesley had eight of his 13 in the second and Butler chimed in six. Butler led all players with 21 points.

Butler and Wesley both hit two three-pointers in the second, and Bishop James and Jamard Valsin each buried a trey in the frame.

Both teams put up 13 in the third with Butler going for 10 on three, three-pointers and a free throw and Damo had five for PNG.

The Titans were up 50-32 heading into the game’s final 8 minutes.

Memorial hosts Livingston on Friday while PNG travels to face Lumberton. Both games are scheduled to start at 7:30 p.m.

**UPDATED with quotes from Mike Schultz** Lamar running back Austin Krautz of Nederland made a surprise announcement Monday on his... read more