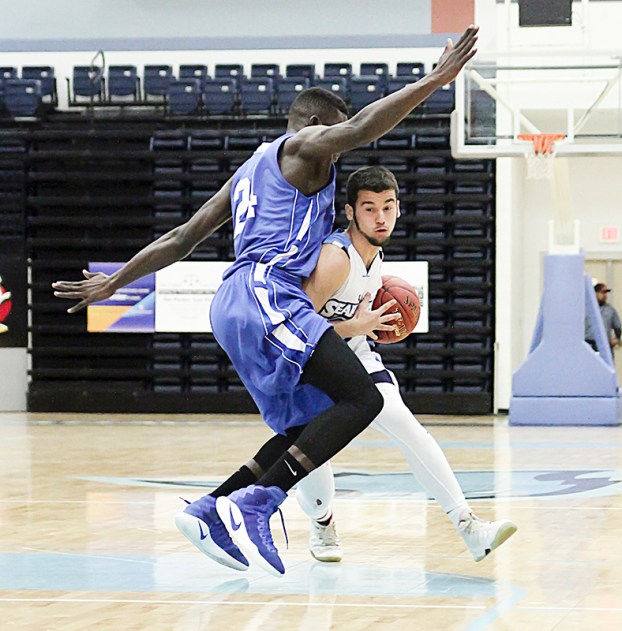 The Lamar State College Port Arthur Seahawks had their chances Saturday against Kilgore College, but it was never in the cards for the home team to win.

The Rangers handed the Seahawks their sixth loss in NJCAA Region XIV play with a 66-57 win behind 22 points from Tre Evans. The Seahawks lost six conference games all last season and were knocked out of the Region XIV Tournament in the semifinals.

LSCPA sophomore John Comeaux missed three shots down the stretch, as the Seahawks could never cut into the lead in the last minute of the game.

“We have to play a little smarter there at the end,” LSCPA coach Lance Madison said. “We had the chance to make a couple of plays. We just have to get tougher. I just don’t think we are tough enough to finish the games.”

Trouble started to brew for the Seahawks early in the second half when Petar Radojicic was whistled for his third and fourth fouls back-to-back. This sent him to the bench and opened up the middle for the Rangers.

Evans would soon hit a pair of three-pointers to put the Rangers up four. The lead grew to seven at 44-37 with 13:55 left in the game after a jumper by Evans.

“When Petar got in the foul trouble, we were a little small without him in the middle,” Madison said. “Tre Evans is a good player and he got loose for a couple threes. That was probably the turning point in the second half. It was a tale of two halves.”

Madison did not blame the officials but he was upset with calls and no-calls several times Saturday. So was Kilgore coach Brian Hoberecht.

“I think there were 19 fouls in a 6-minute time frame,” Madison said. “It is hard for the players to get into a rhythm when they do that.”

Radojicic led the Seahawks with 17 points to go with nine rebounds. He was 8 of 9 from the floor.

It was quite the opposite kind of day for Comeaux. He finished with 16 points, five rebounds and three assists, but the Ozen graduate struggled shooting in a big way.

Davon Newton, Chad Bowie and Ndene Gueye all had 11 points for the Rangers.

The Seahawks host Angelina College at 7:30 p.m. Wednesday. The Roadrunners entered Saturday’s game against Bossier Parish with a 12-5 overall record and were 4-2 in conference play.