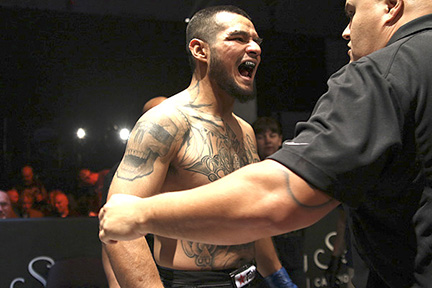 Jose Ceja of Port Arthur has gotten used to fighting in front of television cameras.

The mixed martial arts fighter owns a 3-1 TV record and will now compete in a historic fight card for the Combate Americas circuit that will air in two countries.

He just doesn’t know much about the guy he’s taking on.

“All I know is he’s a Dutch kickboxer from Florida,” he said of Joey Ruquet.

The bantamweights will compete in Combate America’s first-ever event outside of the U.S. at the El Plaza Condesa in Mexico City on Thursday night. Azteca America will carry the fight card live starting at 9 p.m., with pay-per-view UFC Fight Pass will begin airing the card at 7 p.m.

An affiliate for Azteca America in Southeast Texas is not listed, but the network is available in the Houston area on KYAZ, channel 51.1. TV Azteca in Mexico will air the event on a tape-delay basis starting at 11 p.m.

This will be Ceja’s first fight since beating Irwin Rivera in New York, where Combate is based, in a first-round knockout on Oct. 14. That was his first fight with the circuit.

“When we first brought him on, he put on a phenomenal fight,” Combate spokesman Mike Afromowitz said.

Ceja (4-3), who trains in Port Arthur, Houston and Lake Charles, said he accepted that fight on 14 days’ notice, but it was a chance at avenging a defeat to Rivera.

“It was a really good payback experience,” he said.

The Ceja-Ruquet fight is a non-title bout, but it gives the fighters added exposure.

“Both of them have shown a lot of promise since we brought them on,” Afromowitz said. “They come out of the gate. They’re technicians. They let their hands and feet go.”

His goal against Ruquet (3-1) is to put pressure on him in the cage but also to be himself.

“Jose’s very polite but very serious,” Afromowitz said. “He takes that in the cage ring and Joey, likewise.”

This is the 11th production for Combate, which was founded in 2013 and is headed by UFC co-founder Campbell McLaren. The circuit, according to a release, is designed to build Latino fighting champions and serve Hispanic fans.

Titans pick up intensity, rally in 4th to beat Bulldogs

NEDERLAND — Port Arthur Memorial might press a lot on defense but with five minutes and after a timeout, the... read more