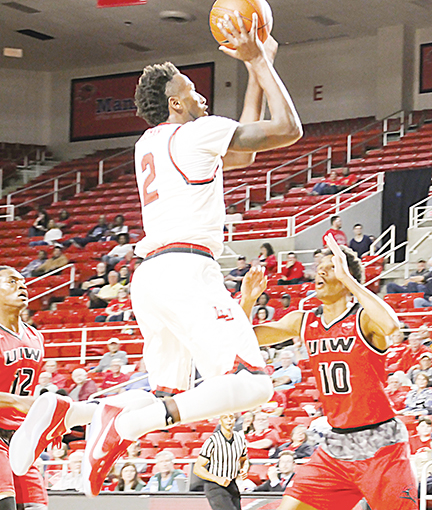 Dorian Chatman of Lamar, from Port Arthur, pulls up a shot against Tyler Singleton of Lamar on Wednesday. (I.C. Murrell/The News)

• About the game: Lamar’s 10-game winning streak is the second longest in school history. The Cardinals have not lost since Nov. 20 against Kansas State…Abilene Christian has the same record as LU but the school is in its last year of moving to Division I. ACU is ineligible for the SLC Tournament and NCAA Tournament.

Lamar sports information
BEAUMONT — Winners in six of their previous seven games, the Lamar men’s basketball team (11-6/3-1 Southland) heads to Abilene as one of the Southland Conference’s hottest teams.

One of several Southland teams who is attempting to prove the preseason pollsters wrong, the Cardinals enter Saturday’s contest in a two-way tie for second in the league standings (Central Arkansas) – and just a game back of New Orleans in the win column (UNO suffered its first SLC loss of the year Thursday to Sam Houston State).

The Cardinals were expected to be a Southland also-ran picked 12th in the preseason polls. LU has already won as many conference games this season as it had all of last year, and is just four shy of tying its overall win total from the 2014-15 campaign when it recorded the nation’s 11th-largest single-season turnaround.

With so many of the teams who were expected to be at the bottom of the standings jumping out to strong starts, and the top four preseason teams each with two losses just three weeks into the season, it can be argued that the Cardinals have helped conspire for their own brand of chaos on the court.

For the chaos within the league standings to continue, the Cardinals will have to do some damage away from the Montagne Center which has been a roller coaster ride this season to say the least. Big Red is two games below .500 on the season, 3-5 (.375), on the road but one of those victories was a stunning three-point win over 2016 NCAA tournament participant Oregon State.

To make the situation a bit more exciting, Big Red’s next opponent is extremely tough at home. Abilene Christian is 5-2 (.714) in Moody Coliseum this season. Although the Wildcats got out to a slow start in conference play (7-9/1-4 Southland), they’re coming off a nine-point thumping of defending league champion Stephen F. Austin just a few nights ago.

Saturday’s match-up will be an interesting battle of opposing strengths, as the Cardinals lead the Southland in scoring offense, while ACU has one of the league’s toughest defenses. The Wildcats will be busy trying to slow down junior Colton Weisbrod, who is averaging 30 points per game in LU’s last two outings. Even if ACU is able to slow down Weisbrod, the Cardinals have seen a re-emergence of junior Joey Frenchwood who broke out of a minor slump with a career-high 21 points against Incarnate Word. Opponents can’t overlook the Cardinals defense. Big Red leads the Southland Conference turnover margin.

ACU was led by then-freshman Jaylen Franklin last season, who edged out LU’s Nick Garth for top scoring honors among all Southland freshmen. Franklin is currently third on the team in scoring, which makes ACU extremely dangerous. Franklin is every bit as dangerous as last year, but now he is receiving offensive help from Jaren Lewis (15.8 ppg) and Jalone Friday (13.5 ppg).

Saturday’s game is slated to tip off at 4 p.m. from Moody Coliseum. It can be heard live on Newstalk 560 KLVI.

BEAUMONT — The Lamar Cardinals did not have time to celebrate and worry about being on a 10-game winning streak... read more