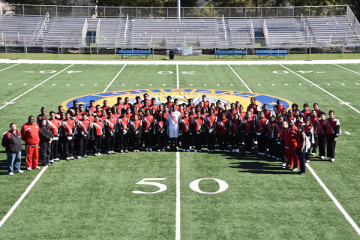 Memorial High School Marching Heat will host the 3rd Annual Battle of the Bands at 5 p.m. Saturday at Memorial Stadium. Presale tickets are $10 and $12 at the gate. Kids age 6 and under get in free. Courtesy photo

Correction: Battle of the Bands to showcase style, precision

Ten high school marching bands from across Texas and Louisiana will descend upon Memorial Stadium for the 3rd Annual Battle of the Bands on Saturday.

Trent Johnson, MHS band director, said MHS’s Marching Heat will not be part of the competition but will perform an exhibition show, which begins at 5 p.m. Jan. 14.

Three college judges will be in town to judge the event — at stake is a 5-foot tall grand champion trophy for the overall winner.

Dancers, flags, twirlers and drum majors will also be judged as well as the bands, Johnson said.

“Judges will be looking at two categories; the sound aspect, the balance and blend of the music and the marching style which is the precision, instrument carrying where everyone carries their instrument the same and the show style is a small potion that goes on crowd appeal. They will be looking at all of those things,” he said.

“The first year was a huge success,” he said of the Battle of the Bands event. “Last year we had rain but still had nine bands compete. This year will be warm with good weather.”

Johnson said there are a number of elementary and middle school band students who will be in attendance to watch the event.

Eight vendors will be at the event with carnival like foods such as chicken on a stick, funnel cakes and tacos, to name a few.

MHS has 23 graduating seniors this year and judges of the competition who hail from Prairie View A & M, Alcorn State University in Mississippi and Southern University in Baton Rouge, La. will use the event as a recruiting tool and will be auditioning students, he said. Students not prepared to audition during the event will be able to set up a time to audition.

Some Port Arthur residents may be able to get their Commercial Driver’s License training paid for courtesy of the Port... read more