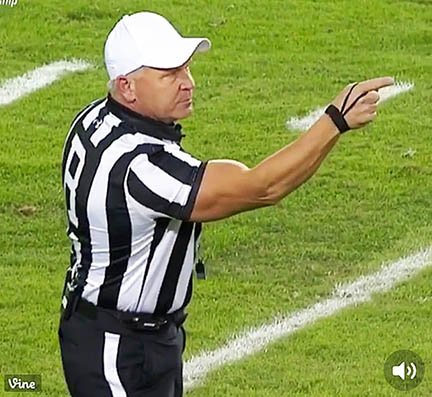 Nederland native Mike Defee was the head referee College Football Playoff championship between Clemson and Alabama. Defee’s muscular arms at some points during the broadcast and on Twitter more than the actual game. (Courtesy photo)

The arms that crushed the Internet

There were more than a few times Monday night football fans needed to remember Clemson and Alabama were playing for the national championship.

The reason so many minds wandered off was Nederland native and Mauriceville resident Mike Defee and his now viral pumped-up arms.

Websites like Twitter were flooded with posts throughout the game about the Southeast Texan and his biceps.

Menshealth.com writer Andrew Daniels even took to the Internet to speak about Defee.

“Last night’s College Football Playoff National Championship was an instant, nail-biting classic between two elite teams, yet all anyone was able to talk about was Mike Defee, the totally jacked referee officiating the game,” Daniels wrote on the site.

Defee’s coworkers at Newtron Beaumont L.L.C. on Tuesday welcomed Defee back from the University of Phoenix Stadium where Clemson defeated the Crimson Tide, 35-31. The Tigers scored with one second left on the clock.

Newtron decided the party should not end in Phoenix. The workers had signs welcoming him back with #mikesarms for all to see. There was even a sign up that read, “Parking for Mike’s arms only.”

“I am just amazed that people in the social world make a big deal out of a football official,” Defee told Good Morning America Tuesday morning. “I’m a 55-year-old man and I’m really not in the Twitter world.”

The fact Defee was trending into Tuesday is proof his arms had their grip on the “Twitter world.”

Monday’s title game was the first in his career. He made his college debut in 2001 in the Southland Conference, which was a member of D1AA. He joined his current conference, the Big 12, in 2006.

His first game to ever officiate was Jasper against West Orange-Stark in 1994.

Defee has been on the field for a Sugar Bowl, Rose Bowl, Cotton Bowl and three Big 12 Championship games.
Defee even grabbed some attention during the 2014 Rose Bowl.

He greeted both Stanford and Michigan State at midfield and started the introductions by saying, “My name’s Mike Defee. I’m your referee today.”

Now his arms have him being compared to another famous football ref.

The NFL’s Ed Hochuli has long been known for taking up every inch of the fabric in his black and white shirts on Sundays.

Defee almost got the chance to test Hochuli as the man with the biggest guns in 2012. Defee was one of 20 finalists to get an officiating job with the NFL. He did not get the position and has remained in the Big 12.

“Contrary to what some may think, I don’t just work out arms. Chest. Legs,” Defee said to GMA. “Try to keep my whole body in shape.”

He finished by saying he has even had college football players grab him by the arm and compliment his stature.

“At times, it seemed Defee purposely made every arm movement he could to show off his pythons while handing out penalties,” Daniels said. “And hey, why not? If you got ’em, flaunt ’em.”
•
Gabriel Pruett: 721-2436. Twitter: @PaNewsGabe

Confidence builder: Bulldogs turn it on in rivalry; Titans next