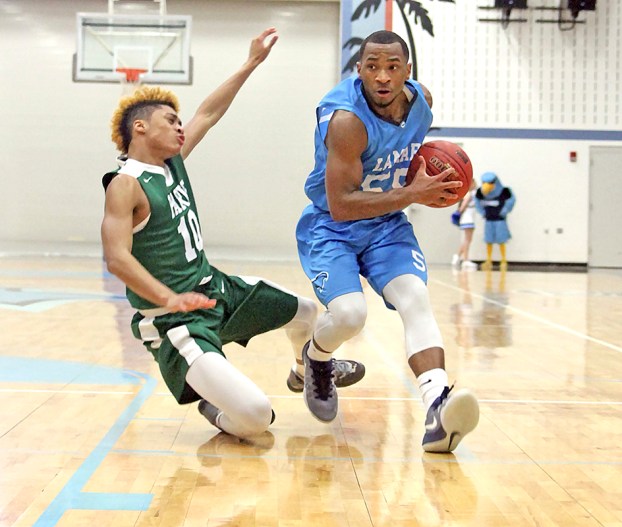 John Comeaux of LSCPA makes a step toward the basket and throws off the balance of Reggie Tharp of Paris on Monday at the Carl Parker Center. (I.C. Murrell/The News)

“We’re going to look back at the end of the year, and there will be a lot of teams that walk out of this gym with an ‘L’,” he said. “To come in here and win, we’ve got to feel pretty good about ourselves.”

John Comeaux’s 20 points and seven assists, and Petar Radojicic’s 19 points and 13 rebounds were not enough for the Seahawks as Paris took a 79-76 win Monday night. The game was a must-have early in the Region XIV slate for both teams, but now LSCPA (10-4, 1-4) finds itself four games behind leader San Jacinto College in the South Division.

Missed free throws by the Dragons (8-4, 2-3) down the stretch kept the door open for the Seahawks, who trailed by as many as six points. Tereke Eckwood missed the second of two shots with 21 seconds to go with Paris up 77-75, and Comeaux drove the ball and dished to Radojicic, who was fouled under the basket with 7.9 seconds left. Radojicic missed his first free throw, but made the second.

After Eckwood sank two free throws, the Seahawks would eventually get two chances to tie. Comeaux was called for traveling with 3 seconds remaining, and Devin Jackson — who scored all of his 24 points on 8-for-16 three-point shooting — missed two freebies before LSCPA rebounded with 0.5 second left.

The inbound pass from the other end of the court was deflected into the hands of Radojicic, whose three drew the rim at the buzzer.

The defeat ended a three-game winning streak for the Seahawks, who had not lost since Dec. 7.

Comeaux was coming off a 47-point effort in a two-point win at Panola College on Friday and scored eight of the Seahawks’ first 12 points Monday. West Orange-Stark graduate Chase Rutledge scored seven of his 13 points during a 10-0 run that helped LSCPA build its largest lead at 25-18, but Abrian Edwards hit six of the Dragons’ last eight points as they went into halftime with a 33-31 lead.

Chol Luk, one of four South Australians on the Seahawks, had 11 points. He and Rutledge each made three 3-pointers.

BEAUMONT — An extra hour before curfew made a lot of difference for the Lamar men’s basketball team Friday night.... read more