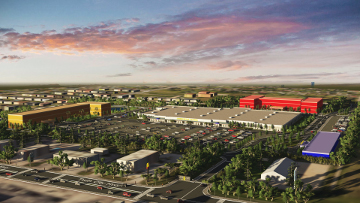 A conceptual rendering of possible development at the former Super K-Mart property in Groves.

GROVES — There are some big plans in store for future development of the former Super K-Mart property.

Those plans, which include a medical center, an assisted living community and an extended stay hotel, will be presented by Mike Cao, a principal owner of the property, to Groves City Council during the 5:30 p.m. meeting Monday at city hall.

“This is a bold undertaking,” Groves City Manager D. Sosa said. “Remember, this is the last of 25 acres of commercial property in Groves.”

Currently Flowserve is leasing 80,000 square-feet of the former retail store. There is the possibility for some of the store to return back to retail use in the future.

Sosa said one reason the owner is coming to the city with the presentation is because two of the possible projects require specific use permits.

The owner is also looking at opening up the road configuration at the property by adding a road behind the current businesses that front Twin City Highway allowing traffic to go from one business to another without having to go back out to the highway. The road would also connect to Monroe Boulevard.

Another road that is between McDonald’s and Sherwin Williams Paint Store would be opened and connect with West Jefferson.

The additional roads would not be a problem for the city because they are already paved. The road would only need to be reconfigured, restriped and a curb added.

“I believe a picture is worth a thousand words and I think Mr. Cao believes this too,” he said of Cao’s pending presentation. “It’s easier to see and to visualize the plan and opens it to better understanding of the scope of the project.

In other business, council will hear a progress report on the Parks Committee recommendations.

The Parks Committee began last summer to collect information on each of the city’s parks and seek recommendations and suggestions for improvements.

The stars came out for Beans & Jeans

Where else can one find Elvis, Tina Turner, David Bowie and Prince under one roof than at Beans & Jeans?... read more