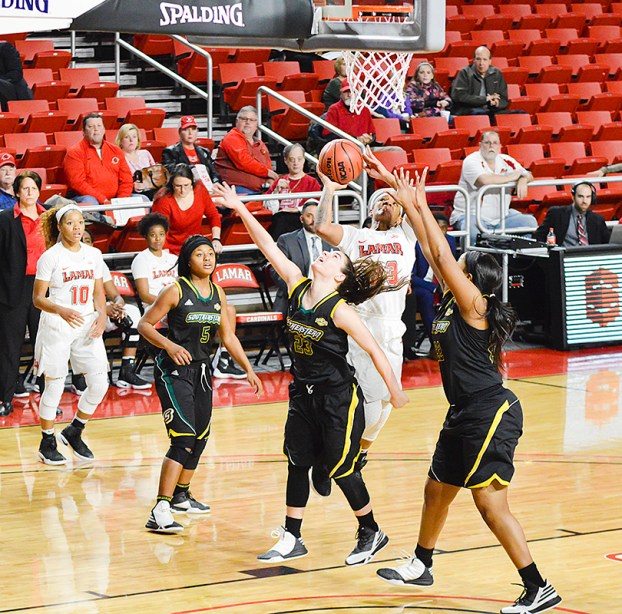 BEAUMONT — Lamar’s nine-game winning streak in women’s basketball is impressive. So is the way the Cardinals are racking up the wins.

LU defeated Southeastern Louisiana 86-68 Saturday at the Montange Center. The nine wins in a row are the second-most in program history. Lamar won 14 straight in the 1990-91 season.

Sophomore Moe Kinard had a career-high 31 points to go with seven rebounds. She played 37 of the 40 minutes even after leaving the game for a few minutes when she got the wind knocked out of her.

“I love our style of play,” Kinard said. “It’s fast-paced. I feel like I fit right in.”

Senior Kiandra Bowers had her sixth double-double of the season with 20 points and 13 rebounds.

“I definitely wanted to be aggressive on the boards,” Bowers said. “It’s something I take pride in.”

That is certainly becoming true for Lamar. The Cardinals forced the Lions into 32 turnovers.

Sophomore guard Chastadie Barrs finished with nine points, nine rebounds, nine assists and three steals. She has at least one steal in every one of her 44 career games.

The Lions never led in the game but also never let Lamar get comfortable, thanks to hitting shots from behind the three-point line.

SELA finished with 20 made shots and 13 of those came from behind the arc. The visitors were 13-of-26 shooting threes while Lamar was 5-of-19.

The Lions only scored 11 points in the paint compared to 52 for the Cardinals.

Taylin Underwood led the Lions with 22 points and 10 rebounds. She was 10-for-12 from the free throw line while SELA was 15-of-18 at the charity stripe as a team.

“I am glad that we got the W,” Lamar coach Robin Harmony said. “I don’t think that we played great defense. We’re going to make some adjustments. We made some mistakes, but they’re not going to learn until they make those mistakes. So, it’s nice to get the win and to learn.”