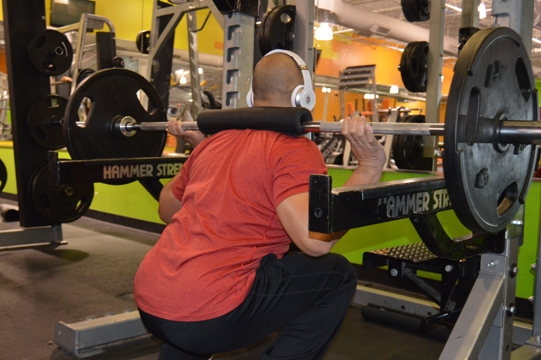 Anthony Do, 39, performs squats with a barbell at Exygon Health and Fitness Club in Nederland. (Lorenzo Salinas/The News)

Resolution? No, just staying fit in the New Year

New Year’s resolutions usually mean a membership to a gym and a promise to oneself to start exercising. But for some people at Exygon Health and Fitness Club in Nederland, they have never stopped exercising.

“This is the busiest time of year,” Travis Dougger, general manager of Exygon in Nederland, said.

Dougger listed New Year’s resolution, the colder weather leading people to work out indoors and people simply wanting to get in shape for the summer as reasons for the uptick in gym membership.

Missy Brauninger, fitness director for Exygon, attributed the surge of new members to such things as new beginnings and becoming a new person for the New Year.

She emphasized that regardless of age, the “things inside are what counts” when discussing a person’s health.

“As a personal trainer, I encourage people to do cardio and weight training and to incorporate classes in their routines,” Brauninger said. “Basically everything to keep healthy.”

She also stressed the importance of making fitness part of one’s life.

“I tell people don’t just diet; make it a way of life,” she said.

Brauninger made special mention of a group of older gentlemen who have been coming in to work out regularly for many years now and were very consistent in their routines.

One of them, Pat Brinkley, works out five times a week at the gym.

“I’ve been working out for a long time,” Brinkley, 75, said. “When I got out of school, I started to get fat. A friend dragged me out to a gym.”

In naming his favorite types of workouts, Brinkley said, “All of it, but the cardio helps me keep the weight down.”

Jesse Martinez, 61, has been working out and keeping active for 20 years.

“I come for health,” Martinez said. “I have some back trouble and there’s machines (here) to stretch out the back. It helps my back.”

Martinez said cardio training is very important to him. He uses both the treadmill and the elliptical machine but the elliptical to really get his heart rate up.

John Dougher, another Exygon mainstay, has been working out for 53 years.

“I started in high school,” Dougher, 68, said. “Weights and cardio. It was just something that I liked.”

Dougher said his New Year’s resolution was to just keep doing what he was doing and to get better. But he was also quick to point out the social aspect of his gym routine. 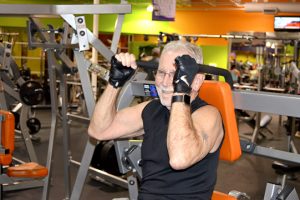 John Dougher, 68, works his core on an ab machine at Exygon Health and Fitness Club in Nederland. (Lorenzo Salinas/The News)

“I come here as much for fellowship as for my workouts,” Dougher said. “We take coffee breaks and keep social. It makes fitness better.”

In the free weights section, Anthoy Do, 39, was performing squats.

“I’ve been coming to Exygon for about two years,” Do said. “My wife started here before and then got me to come.”

Do said, “I’ve been working out my whole life.”

Do highlighted the importance of working the whole body, and marked squats as a vital part of doing that.

“If you do squats, you’re working your whole body — your legs, your core… Most guys work on upper body, but I know I’ve got to do leg day,” Do said.

Do’s New Year’s resolution involved cutting back on his beer consumption, but admitted that holiday drinking was allowed. 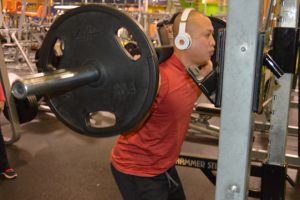 Anthony Do performs squats with a barbell. (Lorenzo Salinas/The News)

In the cardio section of the gym, Nellie McCoy, 68, was working out on an elliptical machine. She used to be a PE teacher for 12 years.

According to McCoy, she has been working out for a lot of years.

“I’ve always been active. When I was a (PE) teacher, I felt I should be doing the exercises that I was making the students do.”

What McCoy does now seems to be more of an overview of general fitness.

“I do some weightlifting, but not as much as I used to,” McCoy said. “But I do active classes three times a week. It has aerobics, strength and balance work.”

McCoy stressed the importance of balance in older people.

“Falling is an issue with older people. Balance is one of the things they want to keep,” McCoy said. “Improving your balance could help you catch yourself if you fall.”

McCoy’s New Year’s resolution was to eat healthy and to enjoy life. 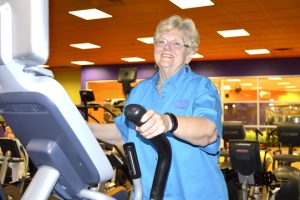 Nellie McCoy, 68, works out on an elliptical machine in the cardio section at Exygon Health and Fitness Club in Nederland. (Lorenzo Salinas/The News)

“I used to be on blood pressure medicine; but, now I’m off of it,” McCoy said. She attributed it to healthy eating and exercise.

“As of now, I’m on no medicine at all,” McCoy said with a smile. “My doctor said that was rare for someone my age.”

McCoy said she likes to travel, and was recently in New York City.

McCoy credited her regular exercise and healthy eating to being able to handle the constant walking in Manhattan.

Sam Monroe, president of the Port Arthur Historical Society, said he could remember as a child women in the community... read more