Scenes from 2016 in Port Neches 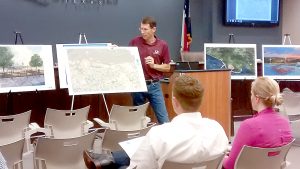 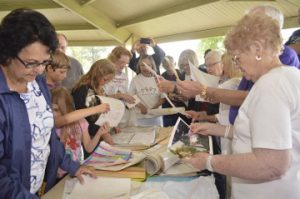 Volunteers who helped build Tugboat Island playground and citizens gather around a table to view the contents of a time capsule that was buried 20 years ago in Port Neches. 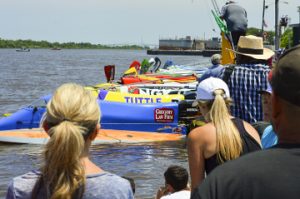 Formula 1 boats line up before the race during Thunder on the Neches powerboat races during Port Neches RiverFest.

PORT NECHES — The city of Port Neches has tackled some big projects this year with even more large-scale projects in the works.

One of the major projects that are now completed is the Port Neches Avenue Enhancement Project. The new look to the historic avenue was officially unveiled to the public in late October during the Second Annual Art on the Avenue event. Patrons and merchants alike saw the new sidewalks, brick-like crosswalks, ornamental lighting, benches and planters.

The project was approximately $800,000, which includes about $600,000 of funding from the Texas Department of Transportation.

“There is a cost savings associated with this as well as an environmental benefit,” Wimer said.

City leaders have big plans for the riverfront area, which includes an erosion control barrier project. This project has been submitted to the U.S. Army Corps of Engineers for review that should be completed by spring 2017 with construction to begin later in the new year.

Also along the riverfront is a project to remove the dilapidated dock and associated structures in the Neches River. A bid has been awarded for the work that is set to being in early 2017 through a General Land Office grant.

During the year there were several public meetings where residents and business owners had a chance to provide input into the planning of development along the river.

Some of the ideas included a boardwalk, benches, decorative lighting and a walkout pier along the near on-mile stretch of land at the river’s edge.

The idea is to build a destination for the city that compliments the city’s lifestyle community.

A conceptual planning and design document will be presented to city council in early 2017. Some of the funding will come from a GLO grant.

The city also saw a successful RiverFest celebration complete with a carnival, vendors, live entertainment and the return of the Thunder on the Neches powerboat races.

Also during the year council approved the purchase of body cameras for the Port Neches Police Department with implementation to begin in early 2017.

Nelson, a Wisconsin native, has 24 years experience in the field of fire fighting and emergency response. He was part of a hazardous materials response group at the famed Los Alamos National Laboratory in New Mexico; has served as fire chief/emergency medical services director in several different areas and has trained others in hazmat response.

In addition, city leaders and residents celebrated the 20th anniversary of Tugboat Island playground by unearthing and opening a time capsule.

More than 1,500 volunteers came together to create the large play structure that was purchased with donated funds.

PORT NECHES — The completion of a 3-year expansion project at Huntsman’s Port Neches Operations facility has lead to the... read more