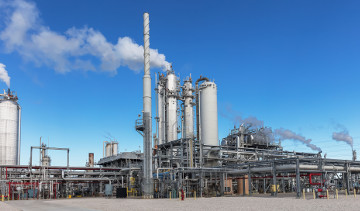 PORT NECHES — The completion of a 3-year expansion project at Huntsman’s Port Neches Operations facility has lead to the facility becoming the largest single-site producer of ethylene oxide in North America.

The expansion, which added a third EO unit to the facility, increased the EO capacity by more than 25 percent, or 265 million pounds per year, according to a press release from Huntsman Corporation.

“The city very much appreciates Huntsman’s investment and commitment to their Port Neches facility,” Port Neches City Manager Andre Wimer said. “It is an important component to the economy, not only of the city, but also of the area.”

EO is a key raw material in the production of surfactants, ethanolamines, polyether amines and other specialty amines, ethylene carbonate, ethylene glycols and polyols used in a variety of industries from agriculture to personal care.

“Additional ethylene oxide capacity at our Port Neches Operations facility further positions Huntsman as one of the largest producers of EO in North America,” Chad Anderson, site director at the Port Neches facility, said in a press release. “Huntsman’s EO plant impacts our local community by adding jobs and sustainable products and providing a stronger economic base for the Golden Triangle. We are very fortunate to have worked with a variety of local companies during the expansion of the facility, as their partnerships during construction were crucial to us bringing the plant online.”

The project added 14 full-time positions to Huntsman’s staff and an additional five to 10 contractor positions on site.

Contractors who worked on the project are:

The expansion project kicked off with a groundbreaking ceremony in October 2013 near the Spur 136 offices. Peter Huntsman, chief executive officer of Huntsman Corp. was on site for the celebratory event and said the investment in Port Neches showed the importance of the site, not only for local jobs, but also for what it means to the global market.

Commissioners with Jefferson County penned an abatement agreement with Huntsman in 2013 and an amended agreement in 2014.

A tax abatement is used to increase economic development by lowering the property taxes of a company for a time period usually between 10 to 20 years. The intent is to lower operation costs for a company that will provide a viable service, additional jobs and more tax dollars to a region.

The facility is within the extraterritorial jurisdiction of the city of Port Neches, and the city has an industrial agreement with industry within the city’s ETJ.

Huntsman purchased the EO unit from a Beaumont based ethylene glycol producer after the site was flooded during Hurricane Ike in 2008. After performing extensive engineering assessments and environmental, health and safety due diligence, Huntsman dismantled the unit and moved the components down the Neches River by barge for installation at its Port Neches facility.