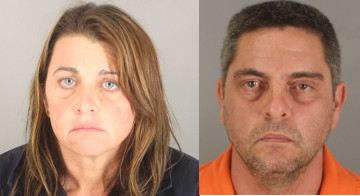 The estranged wife of a Port Arthur police officer and the woman’s boyfriend has been arrested in connection to the Dec. 22 knife attack on the officer.

Kelly Daws, 44, of Silsbee, the estranged wife of the unnamed Port Arthur police officer, was arrested at about 8:30 p.m. Monday, Dec. 26. She was charged with aggravated assault-family violence with a deadly weapon.

A probable cause affidavit for the arrest of Daws and Riley stated that Daws was stressed over the impending divorce from her estranged husband and that she spoke with Riley, her boyfriend, multiple times about “getting rid” of the officer.

Riley had reportedly conducted surveillance on the officer prior to the attack.

Port Arthur police received a 911 call around 6:30 p.m. Dec. 22 about an aggravated assault on a police officer at Willow Lakes Apartments, 2555 95th St. The officer, who was off-duty, answered a knock at his door and was confronted by a man later identified as Riley. The man used a large hunting type knife to assault the officer, cutting him on his arms several times.

At one point Joal Morgan Riley allegedly told the officer he would have to kill him now that he saw his face, according to the affidavit.

The injured officer was able to escape and run for help. He was sent to St. Elizabeth in Beaumont for treatment and was released the next day.

Port Arthur Police Maj. John Owens held a news conference Monday night about the arrest of Riley, whom he did not identify by name.

“The investigation’s ongoing, it’s fluid,” Owens said. “We’re still gathering evidence, speaking to potential witnesses and putting this care together. We’ve been able to reach a point where we were able to find probable cause to place this person under arrest and we did so. However, there is still a lot of work to be done regarding this investigation.”

Mike Hebert was sitting in his patrol car outside Heatherbrook Apartments when he first saw “Miss Jackie” Harris. “She came... read more