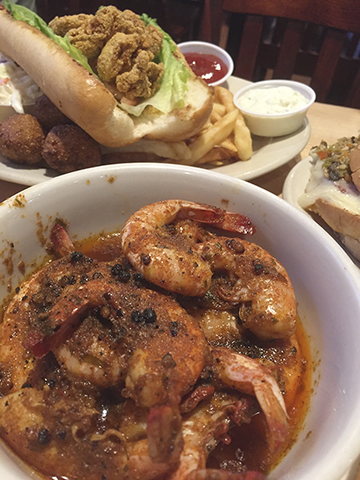 Photo by Darragh Doiron Benno’s in Galveston is an anticipated treat.

CULINARY THRILL SEEKING: Waiting for the ship to come in

Galveston fog did us a number.

It seemed like a quick plan to unite classmates living in Beaumont, Austin and the West Coast who were in from the holidays. One had a family docking from a cruise and we all planned for an 11 a.m. lunch at my favorite island eatery, Benno’s on the Beach.

We started getting the cruiser’s texts before leaving town. Heavy fog prevented ships from docking, so everything would run later. We had conquered parking on The Strand and ate at Yaga’s. We could see her ship come in from our patio table. She texted it would still be a while, so we planned to walk over to the docks and wave at them, but teaser texts followed and we stayed a little longer, shopped and visited until we finally united at 4 p.m. at the Starbucks across from the ships. It was a brief, but fun visit on a balmy December Galveston day.

By balmy, the West Coast dweller means humidity. She claims even my hair would appear straight after a few days in another climate, but this one is all I’ve ever known.

On the culinary side there was Cuban sandwich, fudge, ice cream sodas and taffy. But my family got the Benno’s fix later that evening.

Buttery peppery shrimp with dipping bread and plenty of black peppercorns, a fried oyster poorboy and our first-ever Benno’s muffaletta were mixed and matched among the three of us. We keep quizzing each other over what was the best bite and we can’t decide.

Benno’s, we’ll be back as soon as we can!

Have you seen the statement making the rounds on social media? “Why do chicken nuggets cost $1.99 and a salad... read more