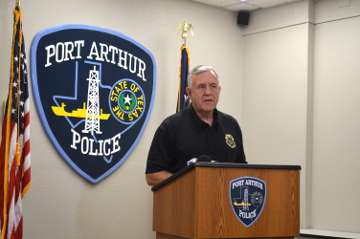 A 41-year-old man is in custody for last week’s knife attack of an off-duty Port Arthur police officer in his home.

The man, whose name has not been released, was arrested at about 4:30 p.m. Monday and charged with aggravated assault on a public servant, Port Arthur Police Maj. John Owens said during a press conference Monday night.

Police are not releasing details such as a possible motive or whether the officer knew the suspect because the case is still under investigation.

Owens commended the agencies involved in investigating the complex case and of the teamwork involved.

“The investigation is ongoing and we are still gathering evidence and putting it together,” Owens said.

The 9-year-veteran officer was released from the hospital Friday morning and is doing well, he added.

PAPD got the 911 call around 6:30 p.m. Dec. 22 about an aggravated assault on a police officer at Willow Lakes Apartments.

Port Arthur Police Officer Mike Hebert addressed media on the night of the attack saying the officer had received a knock of his door by a person showing the officer a machete that he said was left by the officer’s vehicle. About 10 minutes later a second man, described as a white male about 6-foot tall and 200 pounds, knocked on the officer’s door and said the machete was his then began to attack the officer with a survival type knife.

The officer suffered wounds to his hands and arms before the suspect ran away.

Owens was asked if such cases are more difficult to deal with when the victim is a fellow officer.

“We try to remain professional and are trained to be professional however, when it’s a member of your family, it touches our hearts,” he said.

The Port Arthur City Council heard about some high water bills during the summer. Now some relief to users may... read more