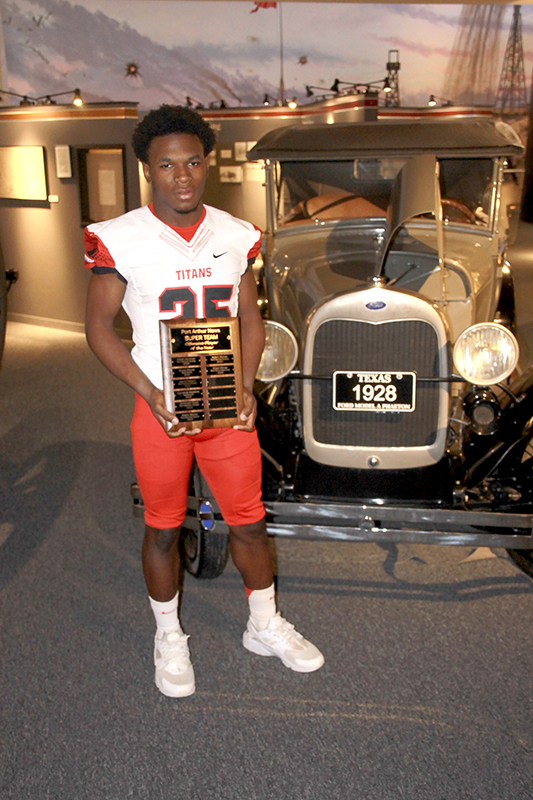 Port Arthur Memorial coach Kenny Harrison before the season started said Elijah Hines would be a good running back for the Titans.

Little did everyone know how good of a season Hines would have in 2016. He has been named the Offensive Player of the Year on the Port Arthur News Super Team.

Hines rushed for 1,661 yards on 157 carries and scored 21 rushing touchdowns.

He was also named the District 22-5A Offensive MVP. Not bad considering this was his first year to play varsity football.

“It felt good to have a good year with my team,” Hines said. “We made it to the third round. It had been a while since Memorial had been to the playoffs, so it was great to have a good season with the seniors. We put on for our city.”

Hines had the what everyone thought was going to be a tough task of replacing Kameron Martin as the Titans’ starting running back and Corey Dauphine’s presence is still felt from two years ago.

“I got to watch them in practice and worked out with those guys,” Hines added. “They are always going 100 percent. They then showed up for game time. I tried to do the same thing.”

He had his best game of the season when the Titans needed him the most when facing the undefeated Port Neches-Groves Indians in District 22-5A play.

Memorial was also undefeated at the time.

Now Hines is looking forward to what could be an even better senior year in 2017.

“I hope to get that state ring,” Hines said. “I watched West Orange-Stark win it all, and that makes us hungry to do it next year.”

There are times when coaches and even sports reporters sit back and enjoy watching a high school football player perform... read more