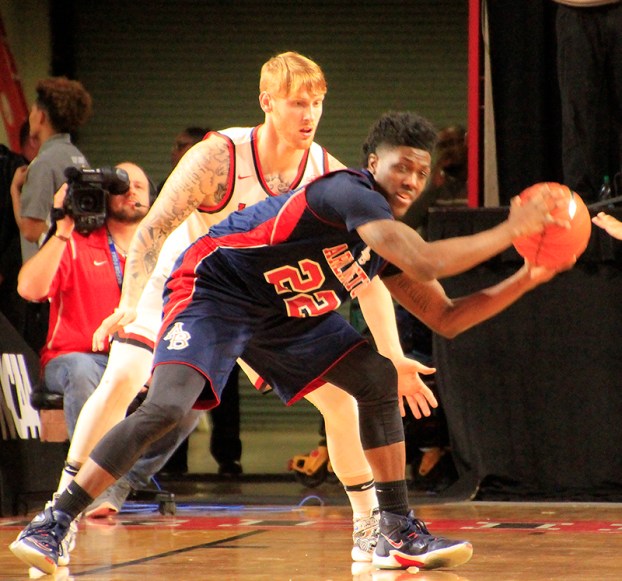 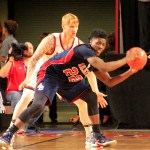 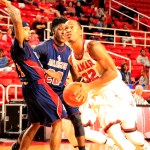 Joey Frenchwood of Lamar drives to the basket but is fouled by Arlington Baptist on Wednesday. (I.C. Murrell/The News) 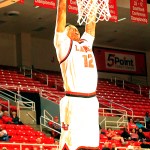 Zjori Bosha of Lamar goes up for a two-hand slam against Arlington Baptist on Wednesday. (I.C. Murrell/The News)

BEAUMONT — Colton Weisbrod made the biggest play of his Lamar basketball career after Wednesday’s game against Arlington Baptist. That was after he finished with 13 points and four rebounds in a 126-75 victory.

After proposing to his girlfriend Allison Jacks on the Montagne Center court following the game on his 21st birthday, Weisbrod said his emotions were all over the place. His age matches his jersey number.

“Nine guys in double figures, 21st birthday and just got engaged to spend the rest of my life with the girl I love, so it’s been a pretty crazy day,” said Weisbrod, the former Nederland standout.

The only thing that was missing from the rafters of the Montagne Center was mistletoe.

Weisbrod’s teammates knew about the proposal and congratulated the future couple on the court. Lamar coach Tic Price didn’t know about Weisbrod’s plan until Tuesday.

“We had it planned a couple of days ago that he was going to do it,” Cardinals guard Nick Garth said.

The Cardinals (7-5) earned their second straight victory and remained unbeaten at home through four games. Their next game Dec. 29 against Huston-Tillotson will complete a three-game home stand.

Garth made his first start in place of the injured Torey Noel (back) and finished with 14 points and two steals. He remained solid from three-point range, knocking down 4 of 7 from there and 5 of 8 overall. He went 7 for 8 Monday against Liberty (Va.).

But that wasn’t the most impressive statistic for Lamar.

All 11 Cardinals who were available Thursday entered the scoring column with at least six points. Nine of them reached double figures.

Guard Joey Frenchwood dished out 13 assists to go with 11 points, one game after totaling 12 assists. Zjori Bosha had nine steals to go with 13 points and three assists, nearing his season high of 10 against Austin College on Dec. 10.

“He was telling me keep being open,” Garth said. “He was going to try to keep those assists up.”

“He’s a guy who can not only score the ball but can pass the ball,” Price said. “He’s so unselfish. Nick Garth should be glad to play with a guy like him.”

Lincoln Davis also had 13 points, Cameron McGee, Josh Nzeakor and Terrance Hubby each had 12 points, and Marcus Owens sank 11 points. Davis and Owens each had one point for every minute they played.

Port Arthur sophomore Dorian Chatman missed the game because of ongoing knee problems, but is expected to return to action soon.

The Lamar band even acknowledged Weisbrod’s birthday late in the second half when Arlington Baptist was shooting free throws, shouting out the “Happy Birthday” song to him.